Callum McManaman has scored the equaliser for Melbourne Victory in a 1-1 A-League draw against Central Coast Mariners.

Coach Alen Stajcic sees no reason to fret after a 1-1 draw with lowly Melbourne Victory extended his Central Coast Mariners' run of A-League games without a win to five.

Mariners' captain Matt Simon's sixth-minute goal was cancelled out by a second-half strike from Victory winger Callum McManaman at AAMI Park on Sunday.

The Gosford side have drawn three games and lost twice since they defeated Adelaide United on April 1, with that triumph constituting their only win in their last nine games.

However, the compact nature of the A-League table means the point earned from the draw with Victory still moves the Mariners back into outright second.

"You can go across the whole ladder and I think only Brisbane has won a couple in a row (recently), said Stajcic.

"It's not as if we're being outplayed in many of those matches. For me, there was a 20-minute period where Victory got on top but apart from that I thought the boys played really well.

"We've got to the point where we're disappointed with draws against big teams like Victory and Sydney that have five to 10 times more resources than we do. I'm proud of how far we've come.

"That's not to say that we don't know how much more hard work there is. We've given ourselves a great opportunity to play finals this year and we want to capitalise on that."

Moving the ball with ease, the Mariners took the lead in the sixth minute when Simon met a Stefan Nigro cross with a header that Matt Acton, though able to get a hand to it, was unable to keep out.

But the visitors were unable to press their early dominance and towering striker Rudy Gestede thought he'd found the leveller in the 50th, only for referee Jonathan Barreiro to wave the goal away after adjudging he used defender Kye Rowles as a springboard.

"It's the hardest job in the game. I just felt it was a goal that should have stood."

Despite picking up a first-half ankle injury that makes him questionable for Victory's Thursday fixture against Macarthur, there was no denying McManaman's 62nd-minute leveller.

"We can't keep on giving ourselves a mountain to climb by only starting in the second half," said Kean.

"That's what we need to improve on." 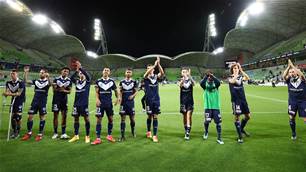