“Greed, for lack of a better word, is good.”

FFA may have chosen cash over community in the two successful expansion bids announced today, but as Gordan Grekko acclaimed in the 1987 classic ‘Wall Street’, greed is good.

At least, it is for marquee signings, and so far the talk has been tantalising.

Macarthur South West Sydney have claimed interest in luring former Socceroos skipper and hirsute icon Mile Jedinak back onto Australian shores, which carries some relevance as the 34-year-old is currently out of favour at Championship club Aston Villa.

But perhaps most interesting is West Melbourne Group’s hat in the ring, Celtic captain and lad’s lad Scott Brown.

Prominent agent Lou Sticca is involved in the West Melbourne bid, lending some firepower in their chase to secure a big name for their debut season, and the Scottish press has already reported the club's interest in the unique midfielder.

And Bhoy is he unique. Forget the technical brilliance of Shinji Ono, have you ever seen a marquee that celebrates being hacked?

Or one that, after having his groin stomped on (on purpose) during a match, laughs it off with, “I didn’t want to have more kids anyway.”

Brown is to the Hoops what Kevin Muscat was to Melbourne Victory – and what teeth are to a Great White Shark. He’s the danger man, in every sense of the word.

Such is the grit and determination Brown brings to his central midfield role that the skipper is arguably underrated for his football intelligence, making over 55 appearances for Scotland before retiring from international football last year.

Like Jedinak, Brown – who is an icon among the notoriously rough-and-ready Glaswegians – has been slowly falling out of contention with Brendan Rodgers' squad, as he tries to take Celtic from Scottish Premier League domination to making an impact in the UEFA Champions League.

Scotland’s loss could be Australia’s gain.

Much has been written about the positive effect that Keisuke Honda’s inspirational leadership style is having on the A-League and it’s likely that Scotland’s own captain courageous could leave a similar legacy, albeit with a slightly different modus operandi.

There are few footballers as globally renowned for their work ethic and never-say-die attitude as Brown. Despite the immensity of Celtic FC, he has in many ways grown to personify the gruff, working-class identity of the side and their city.

Some of these traits are proudly shared by Melbourne’s west. Establishing a club’s identity from scratch takes big personalities, and they don’t come much bigger than the 178cm Scot.

Nevertheless, there will be a few that shudder at the idea of Brown taking marquee status. Renowned for his intensely physical style, he’s been at the heart of some of the SPL’s most divisive tackles and shirtfronts over the past decade.

FIFA’s own World Cup player descriptions described him as having a “reckless streak” while former Hearts manager Jim Jeffries perhaps summed him up best in 2011.

“He has a great heart for the game,” Jeffries said. “His iron will and commitment means he'll go at you all day long, even if he has to curb his tendency to be over-aggressive at times.”

He’s certainly not the silkiest marquee. Regularly criticised for his passing ability, rare goalscoring and disciplinary record, Brown received 18 yellow cards and two red cards between 2009 and 2011, but only found the net six times.

Although he has scored a few crackers over the years.

In short, Brown certainly won’t be a marquee in the vein of Alessandro Del Piero and at 33-years-old, you’d be forgiven for turning up your nose at the Scot for a younger buck.

But perhaps the best way to describe the passion Brown would bring to the A-League isn’t through words at all, but rather a moment that will live on for ever in the minds of Bhoys everywhere.

Brown described it later as “The best booking I've had in my life.” 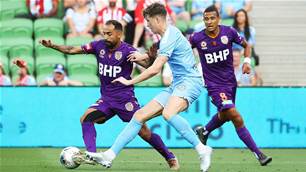