Snapshot following round 9 of the A-League, headlined by Bruno Fornaroli and Besart Berisha haunting their former clubs Melbourne City and Victory respectively.

THEY SAID IT - "He's got a likeability factor as far as I'm concerned because he's everyone's arch-enemy - and I love that." - Western United coach Mark Rudan on Besart Berisha after the striker scored twice against Melbourne Victory

MAN OF THE ROUND - Adam Le Fondre has been superb since joining Sydney FC and his performance against Brisbane underlined his quality. The Englishman scored his first hat-trick in sky blue colours in a 5-1 rout and had two other goals disallowed

BEAT THAT - In his stint at Newcastle, Andrew Nabbout made a name for himself for sensational goals. His finish against Western United was delightful - with the Victory winger latching onto a clever Jakob Poulsen ball, taking on Ersan Gulum and powering a shot across his body into the opposite corner

STAT ATTACK - Trent Buhagiar entered Sydney FC's win over the Roar in the 85th minute. He scored in the 86th minute before assisting Le Fondre's third goal in the 89th. Now that's efficiency

TALKING POINT - Besart Berisha has had a couple of tough weeks at Western United - getting taken off against Central Coast and benched against Sydney FC. He responded with aplomb against Melbourne Victory with two headers - celebrating the second goal in style with manager Mark Rudan

UNDER PRESSURE - If the pressure on Marco Kurz was relieved with a win against Perth, Victory's 3-1 loss to Western United cranked it back up again, while Wanderers boss Markus Babbel will be feeling the heat after defeat against Wellington

WHAT'S NEXT? - Western United will have a short turnaround when they head to Brisbane to take on Roar on Friday night. On Saturday, Melbourne Victory host resurgent Wellington, Sydney FC are home to the Mariners and Glory await the Wanderers. Rounding out the action on Sunday, Melbourne City travel to Newcastle to face the Jets. 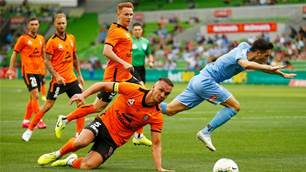 Roar confident in a scrap: 'Look, we're not a bad team'