Victory held an open training session on Friday for fans to meet Honda as the Japanese star trained individually at Gosches Paddock.

Valeri said Honda could be a mentor to him despite being 34 and the captain of the club.

The former Socceroo played against Honda in World Cup qualifiers and was part of the Australian squad which lost to Japan in the 2011 Asian Cup Final.

“I lost that final, so it’s a bit of a bad memory,” Valeri joked. “He’s a fantastic player, it’s very exciting and he’s one I’ve always wanted to play with.

"Now I have the opportunity and I’m very grateful Victory and the FFA have organised this. It’s fantastic for all the fans involved and especially our members.

“He’ll bring that offensive flair, something that’s not missing in the A-League, but is quite rare. I’m just looking forward to how he’ll be off the pitch and how he conducts himself.

“You don’t play 98 games for the national team by mistake, he’s done it, he’s the real deal and I’m sure he’ll produce.”

Honda’s first game could be in the FFA Cup next Tuesday as they travel to Sydney to take on APIA Leichhardt.

Victory are coming off a 1-0 away win over Perth Glory in the Round of 32 last week.

The reigning A-League champions have lost a total of 10 players from last season including Besart Berisha, who has scored 116 goals in his time in Australia.

The Victory skipper said he is confident the club can replicate what they have done in the past three years, despite Berisha’s absence. 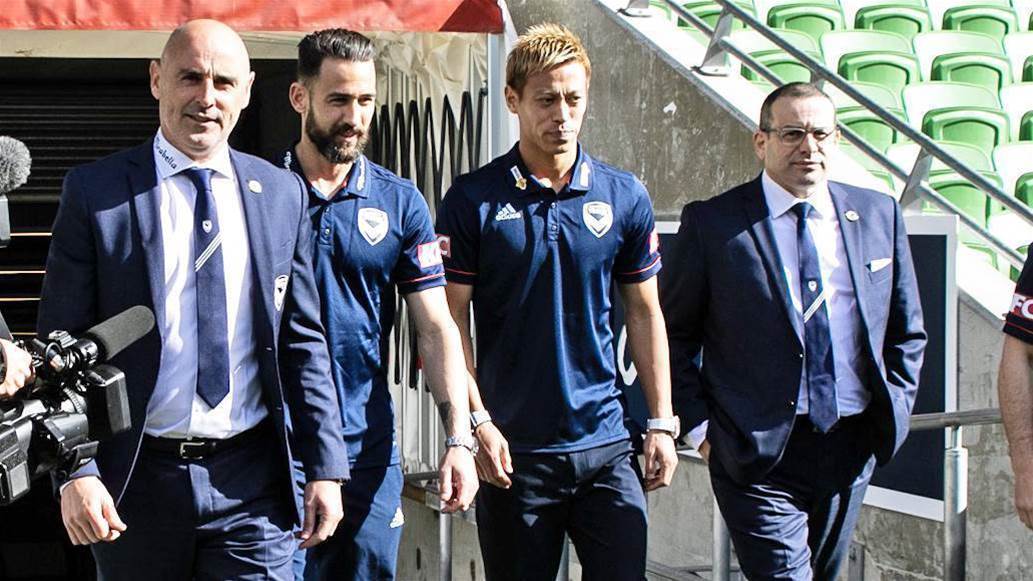 Victory are looking to retain their A-League crown... By Ashley Perez Photography

“I’ll miss Bes. As a person, he’s a good friend,” he said. “He’s part of the Victory family and he’ll always be a part of it because of what he’s achieved and for how he conducted himself.

“Victory are an ambitious club, that’s why we’re here and that’s why we have Keisuke. We want to win every trophy.

“We’re looking to build on the Perth performance. Although people say, ‘It’s only APIA, it’s going to be different’, it’s not the case.

“They’re well prepared and doing well in the domestic season. It’ll be a tough challenge for us and we’re looking to take a step forward.”