With wins over Bali United and Kashima Antlers securing an unlikely place in its group stages, the Asian Champions League has already served as a silver lining on an otherwise cloudy 2019/20 A-League season for Victory.

“[Chiangrai] did really well last year in Thailand. They won four finals last year, that means that they are a winning team. They are tough to play in big games.

Toivonen, who is taking part in his second ACL campaign, welcomed the coming games and explained the different aspects of continental compared to league football.

“I think the whole [squad’s attitude] is changing overall,” the Swede said.

“Because if you have six games you play, or in the last play-off games, it’s just one game. You change your mentality and attitude overall.

“If we go back to the Kashima game, I think we very happy to win that game, as a team and as a club.

“Individually, sometimes [you change your approach].

“I remember the Japanese are little more aggressive in the back and the Koreans are sitting down a little bit and the Chinese you never know what’s happening with them. Depending on the nationality you try to change your game a little bit but not massive.

“I think it’s very good for the youth players to see what’s out there in the world and get good opposition in games. It’s been a tough campaign in the A-League and this break is coming really good for us so we can focus on these two ACL games and hopefully get the result and the confidence in the group.” 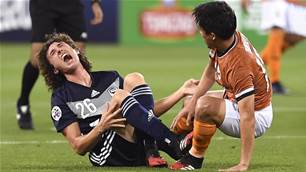