France have named the second youngest squad at the 2018 World Cup, as Didier Deschamps seeks to repair a fractured relationship with the French public.

If you thought Ange Postecoglou was under pressure, you haven't seen Deschamps.

Despite leading the French to the 2016 European Championship final, the Frenchman was pilloried for what the French media dubbed 'tactical mistakes' throughout the tournament.

It's a familiar story for a nation full of promise - often regarded as the best youth production in the world - that so often flatters to deceive.

Only Iceland scored less goals in UEFA qualifying yet made it to the World Cup, while a youthful backline could come under scrutiny.

This would explain why Deschamps' squad is so heavily weighted at either end - of 23 players, only five are natural midfielders, opening up a few slight possibilities for a Socceroos squad formed largely the other way around.

The lack of experienced depth in France's fullbacks is of particular interest, given Australia's newfound versatility in rotating wide and central forwards. Likewise, France will push relatively high in a 4-2-3-1 or 4-3-1-2 formation, allowing space out-wide for the likes of Mat Leckie, Andrew Nabbout and Robbie Kruse to exploit from Mark Milligan or Aaron Mooy's long passing.

If there's one partnership the Socceroos should be concerned about, however, it's the devastating mix of power and precision in Olivier Giroud and Antoine Griezmann.

If performances against Norway, Colombia and Czech Republic are anything to go by, Australia's defenders are going to have a nightmare against Giroud's physical and aerial prowess, while Griezmann will make the Aussies pay for ignoring the second ball.

Nevertheless, the youthful approach from Deschamps retains the fight and hunger - not to mention the naivety of France's less-than-impressive World Cup record - as the nation seeks to easily top their group before launching an attack on Russia's later stages.

Wissam Ben Yedder, Adrien Rabiot and Mathieu Debuchy were also left out despite strong form, while there's no joy for English based Moussa Sissoko, Mamadou Sakho or Kurt Zouma either. 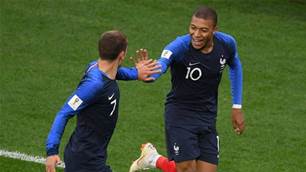 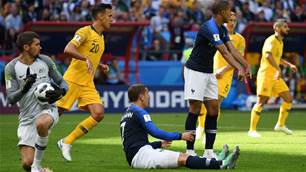