United and Real win while Arsenal hold Chelsea at Stamford Bridge. Catch up with what's been going on in the football world overnight.

UNITED DRAW LEVEL AT THE TOP OF THE PREM

Manchester United moved level on points with neighbours Manchester City after a 4-0 victory over Everton at Old Trafford.

Despite the emphatic scoreline, José Mourinho’s side didn’t have it all their own way, with three goals coming in the last eight minutes of the game.

Antonio Valencia fired the hosts ahead with a thunderous strike from the edge of the penalty area with just four minutes on the clock, yet, Everton, led by Wayne Rooney on his return to the Theatre of Dreams, created chances to equalise in the second half.

The best opportunity fell to Rooney when he barged past defender Eric Bailly in the box, however his effort was saved by David De Gea.

It proved costly, and United ran riot in the closing stages, as Henrikh Mkhitaryan and Romelu Lukaku - against his former club - registered on the scoresheet before substitute Anthony Martial made it four from the penalty spot.

Arsenal restored some of their battered pride with an admirable goalless draw against Chelsea at Stamford Bridge.

The Gunners were thumped 4-0 away at Liverpool three weeks ago, prompting many to criticize their porous backline.

Arsene Wenger's side were far more organised and disciplined against the defending champions,though, and arguably created the better openings.

Alexandre Lacazette was only denied by a last ditch challenge from David Luiz, while Shkodran Mustafi had a header rightly ruled out for offside.

Chelsea’s best chance fell to Pedro before half-time, however the forward was unable to beat Petr Cech when sent through on goal.

Antonio Conte was also dealt a late blow when Luiz was sent off for a reckless challenge on Sead Kolašinac.

MADRID BACK TO WINNING WAYS

Defending La Liga champions Real Madrid won for the first time in three league games with a 3-1 victory away at Real Sociedad.

Sociedad defender Kevin Rodrigues scored at both ends, as the hosts lost their 100 per cent record this campaign.

Borja Mayoral, a 20-year-old youth product, scored his first goal for Los Blancos on
19 minutes when he fired home Sergio Ramos’ knock-down inside the area.

Rodrigues drew Sociedad level nine minutes later when his left-foot volley squeezed under Madrid goalkeeper Keylor Navas, however the French defender then turned Mayoral’s cross into his own net before half-time.

Gareth Bale added a third on the hour mark, as Madrid, who were still without the suspended Cristiano Ronaldo, stayed within four points of league leaders Barcelona after four games.

Our 11 favourite photos from the Matildas Continental Cup domination 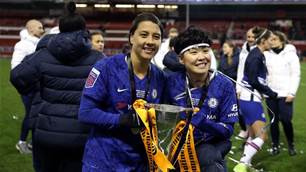 WATCH! Kerr's incredible 'something out of nothing moment': World reaction 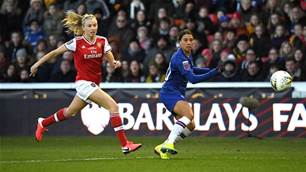 Kerr's English domination: 'This is what I came here for'