The most exciting Olyroos side since 1992 is on the cusp of major tournament success, with A-League 2020/21 pivotal to Australia’s medal chances at the Tokyo Olympics. Here’s why.

The Olyroos qualified for the Olympics in sensational fashion last January in Bangkok.

Many of the team's stars were from the A-League.

But the Olyroos’ preparation games were killed off by COVID.

And now, with the Olympics just nine months away, the Olyroos need matches and match fitness.

Olyroos head coach Graham Arnold is desperate for his A-League players to play regular first-team football in the lead-up to Tokyo.

But there is good news.

Many key Olyroos are set to play major roles at their A-League clubs with fewer imports set to start this financially constrained A-League season.

(See Reno Piscopo's bullet goal for the Olyroos below)

"This age group gets hurt more than anyone.

"We have the NYL (National Youth League) that has eight games a season.

"These kids are too old for that, but then they're not deemed good enough to be part of the A-League,” Arnold said after qualifying for the Olympics.

So, with the Tokyo 2021 Olympics set to kick off next July, this A-League season will be crucial.

And with the A-League season ending next June, timing is perfect for preparation.

As long as all Arnold’s key Olyroos play regularly in the A-League, the core of the squad will get to the Tokyo Olympics match fit.

Most hopes in Tokyo will be pinned on mercurial A-League attacker Reno Piscopo.

Along with D'Agostino and Daniel Arzani, this could be a very special Olyroos strikeforce.

It was the former Inter Milan junior’s class that helped the Olyroos to qualification last January in Thailand.

Piscopo, from Melbourne, has been on the radar for a while after spending most of his teens in Italy (see video below).

At a Phoenix side now ravaged by attacking losses, Piscopo’s influence will be major this A-League season.

Due to travel restrictions, Piscopo’s Phoenix is currently based in Wollongong.

The Reds could have a host of Olyroos in Tokyo.

Mo Toure is one.

Another could be new signing Timotheou.

The former Schalke central defender has been around the Olympics squad in recent years.

Debuting in the Bundesliga has put him firmly on the radar.

Now that he’s over his injury and illness issues, could the big center-back add a dash of quality?

A season starting in the A-League will be vital.

Since his off-season switch from Brisbane, this key cog in Arnie’s midfield has shown his quality under City coach Patrick Kisnorbo.

The Queenslander is sure to play regularly in the A-League.

The big man has been sensational for City.

The former Spurs youth keeper has firmly established himself in the A-League.

His influential form helped City to the A-League Finals and a Grand Final appearance last season.

He’s Arnie’s number one and another season of regular A-League football will help the Olyroos.

D’Agostino remains one of the Olyroos’ most potent threats.

This despite some concerns over his fitness a few months ago from former Glory boss Tony Popovic.

Who could forget D’Agostino's goals in Bangkok as a weakened Olryoos qualified for Tokyo?

But he’ll be a key player in the ACL and A-League and of course the Olyroos.

With all A-League clubs in pre-season for a December 27 kick-off, the A-League Olyroos assemble this week.
The Olyroos will face two A-League opponents as preparation slowly ramps up. 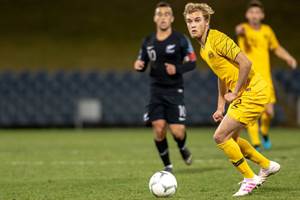 After completing their FFA suspensions, A-League trio Nathaniel Atkinson, Lachie Wales and Brandon Wilson have been returned to the Olyroos squad.
“This group of players – and the many more we are monitoring in Australia and overseas – have the opportunity to be part of a special period in Olyroos history as we work towards Tokyo,” Arnold said in an FFA statement this week.
"The next nine days and the forthcoming A-League season represents a fresh start and a great opportunity for all players to push their case for Olyroos selection in Tokyo.”