Bailey Wright has opened up about his eight months out with injury and says he felt "a huge sense of relief" to return to the field for Bristol City.

The Socceroo was sidelined with a thigh injury that kept him out for months and cost him a place at the 2018 World Cup.

Wright finally returned to action for City on New Year's Day against Stoke.

"I’m back on the pitch and feeling good and only a few months ago I was struggling to play a game," he told the Well Red matchday progamme.

"I’m in a great place, physically and mentally, and physically I feel the best I have for a long time in my career.

"In some ways an injury can be a way of resetting the body so I have had to focus on the advantages and I was lucky to have a lot of good people around me to make my time as easy as possible.

"Coming on against Stoke City was a bit emotional, actually. I wanted to acknowledge everyone who has helped me in those tough times: the medical staff, strength and conditioning, the coaches, chefs and everyone in the club."

Wright said he was no regrets about playing with the injury and through the pain barrier at the end of the 2017/2018 campaign to help the Robins try and reach the playoffs.

"I pushed myself but my body limited me to what I was telling myself I could do," he said.

"I wanted to help the team, I wanted to play and see where we could go but it took its toll. Of course I missed out on things in the summer and that may have not just been down to the injury but that’s the way of life.

"I worked hard for the World Cup, I pushed hard for four years but of course there are no guarantees you will play in the finals."

Wright also missed out on selection for the Asian Cup but is following the Socceroos in the tournament from the UK.

The defender said he was "gutted" for the team after their loss to Jordan.

"I would love to be there but of course I needed to focus on getting fit," the 26-year-old said.

"I joined the summer camp in Turkey, met the new manager and I got a great vibe and opinion of him. I’d have loved to be representing Australia in the Asia Cup but it is what it is." 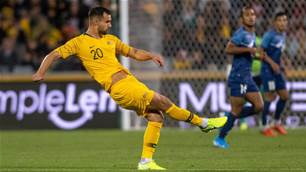