Perth Glory star Bruno Fornaroli admits he and his teammates are concerned about the global COVID-19 situation ahead of their Asian Champions League campaign.

Perth Glory striker Bruno Fornaroli admits COVID-19 is a concern for him and his teammates ahead of this month's Asian Champions League campaign.

The Glory depart for Qatar on Saturday where they'll be in a biosecurity bubble to play their remaining group fixtures in the continental championship.

Perth begin their campaign on Wednesday night against Chinese side Shanghai Shenhua and have four more matches between then and December 3.

If Richard Garcia's young team make it through their group they then have knockout fixtures which could potentially lead to the December 19 final against Iran's Persepolis FC.

The Iranian team qualified following a western zone competition held in Qatar earlier this year which was marred by a coronavirus outbreak.

Defending champion Al-Hilal were forced to withdraw when they couldn't field a full team for a group stage fixture after a reported 31 players and officials tested positive for the virus.

"It's hard because you know what's going on around the world," Fornaroli said.

"We feel safe here but the competition put us there in Qatar.

The Uruguayan is one of the more experienced players among the Glory's 22-man squad in what will be Garcia's first competitive matches since he replaced Tony Popovic at the end of the 2019-20 A-League season.

Garcia echoed Fornaroli's concerns, but hoped the tournament would be a chance for some of the club's youngsters to prove themselves ahead of the new A-League season starting on December 27.

"The protocols look to be a good state and we're pretty confident that everything will go smoothly but there's always going to be that niggling thought in the back of your mind," Garcia said.

"(Hopefully we) see some good young players emerge and we come home safely." 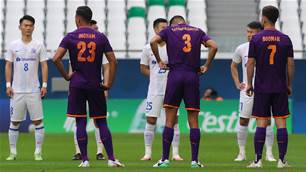