FFT believes W-League 6 will be faster, better and stronger. We summarise the teams and star players while Matildas striker Kate Gill discusses her favourites for W-League glory this summer in the new FFT issue out now. 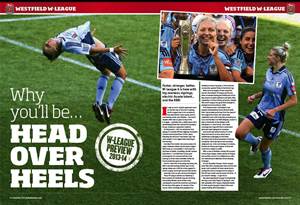 And for iPad head here

For other PC and Android we've got you covered too here

Or why not subscribe? Check out more right here

In FFT’s first issue in partnership with SBS, we feature the W-League … but so much more.

In a world exclusive we sit down with Jose Mourinho...

Failure at Madrid? "Check the stats"

Mind games? "I tell the truth"

We park ourselves inside Mou's office at Chelsea and grill the world's most enigmatic gaffer. Brilliant read, even if we say ourselves.