Australia’s men’s U19 side – the Young Socceroos – have booked their place at the 2020 AFC U19 Championships after recording a 5-0 win over Chinese Taipei overnight.

Following a 2-2 draw with Laos to open their campaign and a 6-0 win over Macau in their second fixture, coach Gary van Egmond’s side entered the final matchday of qualifying knowing that three points would all but guarantee them progression to next year’s tournament as either group winners or as one of the four best runners up from the 11 groups.

Nonetheless, leaving little to chance, the comfortable nature of their win now ensures that Australia won’t have to sweat it out waiting for other results to come in from Group A – the only group yet to stage their games – to come in, with the Australias topping Group H on goal difference and booking their place in Uzbekistan in 2020.

Proceedings against Chinese Taipei got off to almost the best possible start for the Young Socceroos when just seconds into the contest striker John Roberts, looking to run onto a ball played in behind the Chinese Taipei defensive line by captain Louis D’Arrigo, was dragged down from behind by Karl Hu Josefsson just outside the penalty area.

Stepping up to take the resulting free-kick, Adelaide United’s Lachlan Brooke fired home a pinpoint left-footed effort to give Australia the lead.

Continuing to poke and probe the opposition defence in the early stages, Central Coast Mariners prospect Roberts then made it 2-0 in the 12th minute when he pounced on a D’Arrigo shot palmed back into play by goalkeeper Hung Shih Cheng and poked home.

An own-goal from Hu Josefsson in the 33rd minute compounded the woes of Chinese Taipei, before Sydney FC midfielder Marco Tilio – who had a hattrick in Australia’s win over Macau – made it 4-0 after forcing a turnover deep in enemy territory and sliding a shot past Shih Cheng in the 52nd minute.

Roberts then put a bow on proceedings in the 77th minute when he rose highest to meet a corner from Alberto Del Grosso and nodded in from close range.

Australia now joins the usual suspects in booking their place at Uzbekistan 2020 with Iran, Saudi Arabia, South Korea and Japan all confirmed as toppers of their groups overnight.

They will be joined by fellow group winners Qatar, Tajikistan, Bahrain, Malaysia, and Indonesia at next year’s tournament, as well as best second-placed finishers Laos, Vietnam and Yemen.

Cambodia, the fifth-best second-placed finisher from the groups – fourth-best finisher Uzbekistan automatically qualifying for next year as hosts – will however now be forced to wait and see if their record is superior to the second-place finisher in Group A – consisting of Iraq, Oman, Palestine, Kuwait, and Pakistan.

Group A’s games will take place from  November 22 to 30 in Oman. 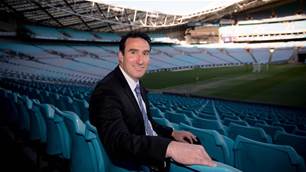