FFT teamed with UBET for a promotion offering one lucky customer and a friend to win a trip to the Big Apple to watch New York City. The final challenge was the hardest, especially for Melbourne City fan Carlo Chincarini

FFT partnered with UBET to offer Melbourne City fan Carlo Chincarini the opportunity to take on a few City players in a Fan v Player challenge. To promote the UBET Kick it in New York promotion, Carlo was invited to spend the morning at the City Football Academy to go head-to-head in a handful of challenges against Neil Kilkenny, Manny Muscat and Josh Rose, as well as meeting some other club legends as the players relaxed after lunch.

In the final challenge for the #FanvPlayer Series, we took a New York twist on the kick up challenge...with a bagel!  It was tough for both contestants, unsurprisingly bagels are much more suited to being eaten than being kicked.

Despite a very strong start, Carlo struggled to continue the momentum and the players came from behind to win the series after the final challenge, 3-2!

As a proud partner of Melbourne City Football Club, UBET is offering one lucky customer and a mate the opportunity to win a trip to New York*!

The prize includes return flights, tickets to a New York FC match at the world famous Yankee Stadium, along with five nights accommodation and a stadium tour! There are also five weekly prizes of a Melbourne City jersey and a FourFourTwo magazine subscription to be won as well!

For more information on the UBET Kick it in New York promotion, go to ubet.com/NYCpromo

Know when to stop. Don’t go over the top. Gamble Responsibly. 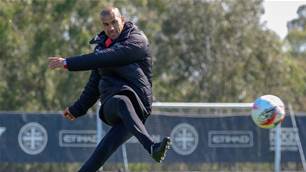