Saudi Arabia are top of the Group on 19 points, with Japan on 15 and Socceroos 14 with better goal difference than either of the top two. Nine points to play for but realistically, Japan are the only team we can catch.

Oman are fourth on 7 and surely out of contention for third place, but they are an outside mathematical chance if they can beat us on Tuesday night (their time), which means they will come at us like maniacs. This will be a very difficult test.

At the same time, Japan will be hosting the Saudis so this is absolutely not the time to be dropping points. Either or both of those teams will drop points so if we do manage to win in Muscat we will leapfrog Japan (if they lose or draw). If we and Japan both win then the Saudis are dragged back into the pack.

A win in Muscat is certainly not beyond us. We played well against Vietnam – revelling in the return of Rogic and Mooy – and that will give the team some confidence after the recent disappointments.

Rogic in particular was masterful on Thursday night – finding space between the lines and always dangerous. He will be closely marked by the Omanis but he’s used to that and will certainly create some chances. We just need to make sure we are ready to pounce when the chances come.

I thought Matt Leckie was a bit wasteful the other night – first half especially, even if he did set up Rogic for the second. He had at least three very good opportunities and had to do better. Maybe Craig Goodwin to start?

I was delighted for Goodwin who took his chance well – showing composure to chip the keeper. This was in contrast to Leckie who had a similar chance first half and hit the keeper. Goodwin then set up Riley McGree who still had work to do when he received the ball but made space and took his goal superbly. Goodwin and McGree will play a lot for Australia over the next few years.

The wide fullbacks also did well. Karacic (in my opinion) has to be the incumbent for now but I do want to see Nathaniel Atkinson brought into the squad (he can also play further forward). Joel King was excellent on the left but wasn’t really put under any defensive pressure. Had some great moments in attack and one cross in particular was very dangerous. It will be interesting to see whether Behich gets the nod on Tuesday. I’d keep King.

The other player, besides Leckie, with a question mark after last night was Jackson Irvine. He’s been largely ineffective the last few matches and was mostly missing or wasteful against Vietnam – loses so much possession. I’d seriously consider McGree in his place if I were Arnie.

As for that, one of my recent articles was critical of Arnie for sticking too much with his tried and trusteds who are no longer up to it. From that perspective, last night’s team was (partly) a breath of fresh air – with an interesting Starting XI and good use of subs. More please.

Tuesday night will be very tough. We will need players who are technically on top of their game but also up for the fight. The Omanis will throw the proverbial at us and be rolling around shrieking every time we come near them (I thought the referee had an excellent game on Thursday – mostly). We need to be made of stern stuff and stay on the right side of the ref. Above all, we need to be solid at the back and take our chances ruthlessly.

If we win this game then four points from the last two games might be enough.

If we lose or draw, it will be very hard indeed. That late own goal against Japan is looking so costly right now.

Coming third, with an ultimate play off against the fifth placed South American team, simply doesn’t bear thinking about. 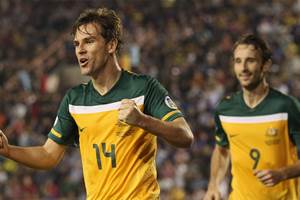