Page 1 of 2  |  Single page
Back in July 2005, the eight Hyundai A-League clubs unveiled their kits in a shopping centre in Sydney’s eastern suburbs. Having watched the teams contest the Club World Championship Qualifying tournament in temporary shirts, most fans fell in love with their teams’ shiny new outfits at first sight.

Yet there was some consternation in the audience. ‘They are too similar!’ some cried. ‘What about the away kits?!’ others shouted. ‘Queensland Roar’s shirt is making my eyes bleed!’ another was heard to say. 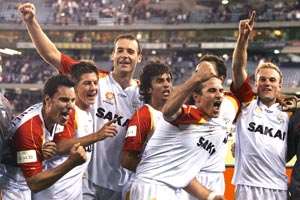 With such a limited time prior to season kick-off back then, the clubs, the FFA and Reebok’s achievement in producing all eight home and away strips was significant. However, the time frame did not allow for more subtle variations in the strips, nor significant alterations to the away kits, which were all predominantly white.

It’s been a year and a half since the unveiling, so The Full90 thought it was time to get the latest from the land of nylon mesh and natural necklines.

The Big V
The Hyundai A-League is unusual in that the same manufacturer, Reebok, provides strips to all the clubs. Where teams in leagues overseas wear uniforms bearing several different brands, the Hyundai A-League and FFA’s desire for efficiency in developing the clubs’ strips, as well as the highest product quality, led to the competition-wide deal.

Having received feedback from the clubs and their fans, Reebok has already begun updating the range, beginning with the away strips this season. “Basically the kits change every two years. The clubs have the option of changing them or keeping them the same,” Reebok Australia Business Licensing Manager Tracy Novak says. “This season the teams were allowed to change their away strip. Five nominated for it, including Melbourne Victory.”

The new Melbourne Victory away shirt bears a bold white V on a grey (“silver”, according to the marketing) and navy base. It is not only the most distinctive away strip in the competition, it is also the first example of the clubs developing unique branding on their playing strip.

The ‘V’ design is associated more with aussie rules or rugby, but is an image with which the Melbourne Victory club is keen to identify. “They were very big on their V! I don’t think it mattered about what else was on the garment,
as long as we had the V on there,” Novak recalls.

Reproduced from TheFull90 – the official matchday magazine of the Hyundai A-League www.a-league.com.au Get it at the game!
Next Page
1 2 Single page Casemiro to miss Brazil's quarter-final due to suspension