NPL1 clubs will play complete a 13-game regular season - of which five games have already been played - and take part in the Dockerty Cup under Football Victoria's latest plan to resume play in its top-tier in 2020.

With time winding down in the race to salvage some semblance of a 2020 NPL1 season in the state, FTBL understands that FV met with representatives of the AAFC and the competition’s 14 teams to further negotiations.

The resulting feedback led to a proposal sent by the Victorian federation in a letter, a copy of which FTBL has obtained, sent to NPL1 club Presidents on Friday.

Contingent upon all 14 teams agreeing to return to the field in 2020, FV's proposition would see the Victorian top-flight recommence its season – which was suspended after the completion of five rounds in the face of the COVID-19 pandemic – exactly where it left off, with results carried over and clubs playing their round six fixtures.

Once clubs had played a further eights games, bringing the total rounds to 13 and ensuring clubs would have all played each other once, the regular season would conclude – with a top-six then moving into a finals series.

The Dockerty Cup would also continue alongside this shortened competition, the staging of which would also enable to FV to fulfil its FFA Cup requirements should the FFA salvage the competition in some form in 2020.

Should the proposal not induce all of the competition’s 14 clubs to resume, FV notes, a new competition format would need to be agreed upon. There remains scope for the season to be extended should further agreements be reached, possibly through the employment of an extended finals series.

NPL1 clubs have been given until 9:00 am on Monday, June 15 to signal if they intend to compete under the proposed structure.

FV had previously announced the creation of a rebate pool that would go to NPL1 clubs that took the field in 2020, which the letter outlines will be reduced to $80,000 - $5714 per club, assuming a 14-way split – and split over two months in light of the proposal bringing the number of games proposed down from 21 games in fourth months to eight in two.

The fund would be paid in two monthly instalments – predicted by FV to be August and September – and clubs with outstanding debts to FV would remain ineligible for the fund.

As it was previously, the rebate pool would cease its operation should restrictions on live attendance to 300 people (inclusive of players and officials) the fund would cease. On Friday, the Federal Government highlighted the possibility of crowds returning to live sport in July.

In keeping with previously announced principles, relegation would not be in operation for the season and those clubs considering it not viable to compete in 2020 have been told they are able to keep their place in the pyramid contingent upon payment of their senior men’s licence fee of $25,000.

Thanks to an agreement with the FFA, a COVID-19-enforced modification of the Player Points System (PPS) would see any player that left a club in 2020 and re-joined it the following season will not incur PPS switching points. An exemption process wherein clubs could apply to FV for special dispensation on player transfers related to COVID-19 would also be introduced.

A new target commencement date of Friday, July 17 would be established; four weeks after a proposed full return to contact training – contingent upon State government and health authority approval – on June 22.

Promotion from NPL2 and below on the footballing pyramid would remain in place under the new competition format, meaning that the NPL1 will expand to 16 in 2021. According to its letter, FV will support the option of four teams or two teams – depending upon club feedback – the following season.

FTBL has been told that the proposal has generally been received favourably by clubs, but that at least two retain concerns of player safety as well as financial modelling.

FV has previously outlined a series of financial support measures for clubs further down their footballing ecosystem, with, contingent upon approval being granted from State Government and Health authorities – which FV has formally requested – an NPL return of July 10 targeted. It is unclear if the latest proposal to NPL1 clubs would affect start times of NPLW, NPL2 and NPL3 clubs.

Junior NPL competitions are pencilled in for a June 27 return under FV’s proposals, whilst community juniors will resume a day later under the federation’s plans. Community seniors are targeted for a July 11 return. 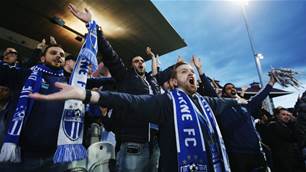