A week is a long time in football, and for Greg O'Rourke it will have been his longest yet. Now club CEOs are throwing their support behind the under-siege leagues chief

A travel catastrophe saw Melbourne City, Victory and Western United players say goodbye to their families, only to stall at Tullamarine Airport two nights in a row, failing to fly to Canberra to complete the A-League season. 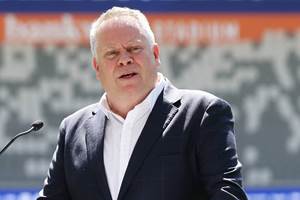 With Victoria going back into lockdown restrictions and state borders closing, O'Rourke's plans to extract the three clubs failed.

But Professional Footballers Australia labelled the mix-up unacceptable while some have called for O'Rourke's removal as Head of Leagues after an embarrassing week for the sport.

To those criticizing Greg O’Rourke’s actions this week, you have no understanding of the complexity of the situation and the lack of resources at his disposal to get the outcome the game needed.

Well said Danny Greg and the staff have done an outstanding job under the difficult circumstances https://t.co/wXrs2TvQ5a

"It was an unprecedented scenario and something no-one can plan for and if it wasn't for some fog there wouldn't have been any other issues," Mielekamp told FTBL. "He's got the job done and it was a bumpy ride."

"My personal opinion is that every CEO is supportive of Greg O'Rourke knowing the challenges he's had to face. This was the one that was public."

When asked what the removal of O'Rourke might mean for the direction of the league's group, Mielekamp thought it "not his place to comment on that".

O'Rourke's intel showed that on Friday there were "no discussions" in the government about the border being closed. That protocol swiftly changed at the beginning of the week. He received criticism for what was believed to be a reactive approach to the government announcements on the closing of the Victorian border.

The A-League's reaction was compared with the AFL, NRL and Supercars which all were able to make it out of Victoria well before A-League clubs scrambled to the airport on Monday.

The A-Leagues chief acknowledged his head is on the chopping block following the debacle and understood the reaction to the situation.

"I don't expect any other feedback and I also accept that's exactly what might even happen to be honest," he said.

The A-League season was due to restart on July 16 with Melbourne Victory playing Western United, but both teams are now likely to still be midway through their two week quarantine in NSW, forcing a fixture reshuffle.

All travelling parties are required to return a negative COVID-19 test before they can leave Victoria, with everyone expected to fly out this weekend to set up an isolation camp in NSW.