Some have moved into some intriguing industries post-A-League.

"One is a Google certified partner.
Another is a rising star in German youth coaching.
And there’s an agent, based in Europe.
One defender even joined the Army"

One is a Google certified partner.

Another is a rising star in German youth coaching.

And there’s an agent, based in Europe.

One defender even joined the Army.

So, we start with one of the A-League’s greatest strikers.

They love him in Brisbane, Adelaide, and in Indonesia.

And if you watch the videos below, you’ll understand why the fans loved him.

A decade ago, Sergio van Dijk ripped up the A-League.

The Dutchman with Indonesian heritage was unstoppable.

So many for the former A-League Golden Boot (enjoy below).

He left for the Indonesian league in 2013.

And didn’t the fans love him there, too.

The striker returned to Adelaide briefly in 2016.

The Reds were trying to beef up their ACL stocks.

These days, the now 38-year-old has retired.

His last club was semi-pro outfit VV Pelikan-S in Holland.

He has moved into the business of football over the last year.

Van Dijk is the founder at sports agency SGM Global in Groningen.

He has also begun working this year as a player agent with management company Tevreden Group.

When the A-League began, it was the "Danny and Archie show”.

Allsopp was the powerful target man who worked incredibly hard off the ball.

And he could finish

And Thompson was the pacy option who could get in behind.

Victory fans, do you remember how good those days were?

Best front two in the A-League?

This video shows why Danny was the man.

Season two of the A-League was when the duo and side dominated all comers.

The Socceroo had subsequent stints in the MLS and Qatar’s top league.

The former Hull City and Man City forward returned to Victory in 2012 but it wasn’t quite the same.

He had a very brief stint in Tassie NPL football but retired in his mid-30s.

Now 42, the former A-League striker is in the workforce.

At his peak, Murdocca was one of the fittest and most effective A-League central midfielders.

Little wonder he’s now working in the strength and conditioning industry in the A-League.

The pint-sized mid gained experience in the sports industry by interning at AFL clubs Essendon and North Melbourne as a performance analyst.

With qualifications - a BA in exercise and sports science and a Masters in Sports Science - the now 36-year-old is an assistant strength and conditioning coach at A-League club Western United.

He joined A-League new boys Western ahead of its first season.

And the cheeky Murdocca was always up for some media fun in Brizvegas over his eight years in the Sunshine state.

And wouldn’t you know?

"Mass” is still as fit as ever.

Click the next page for one of Australia's three Griffiths brothers to find out what he's been up to lately... 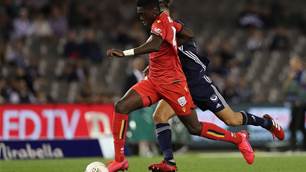