A-League powerhouse Perth Glory and NPL NSW club Wollongong Wolves are in a standoff over the contract of goal-machine Thomas James.

James, 26, one of the NPL’s most prolific strikers, was signed by Perth Glory on a six-week contract from Wollongong Wolves in mid-July.

However, frustratingly, as Glory's results dipped, the Wolves forward did not feature in any A-League games.

As such, James decided on the weekend to move back to Wollongong to play regular football with his NPL outfit.

Wolves anticipated a release for the striker, but the A-League club has allegedly informed the NPL side that they aren’t budging, and James won’t be released from his contract for another two weeks.

If so, it would mean James would miss a total of three games for Wolves coach Luke Wilkshire, a former A-League and Socceroo defender. 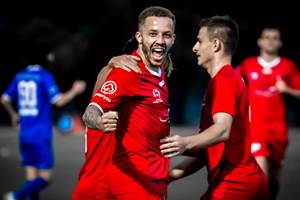 FTBL understands the NPL club has given last season’s A-League premiers a 24-hour deadline to resolve the issue.

And Wolves, a former NSL Championship winner, is said to be disappointed with the hardball attitude of Perth Glory.

Wolves, third on the NSW NPL ladder, play this weekend against ladder-leaders Rockdale in Round 4.

Perth Glory’s quest for successive A-League Grand Finals kicks off this weekend in the Elimination Final at Bankwest Stadium.