An injury to striker Kusini Yengi has left United looking towards the A-League January transfer window to solve its goalscoring woes. Yengi is one of three Adelaide players injured this week.

Adelaide United's loss to Western United continued their difficult start to 2021-22, with the team failing to get a win in five matches.  Struggling to find the back of the net is at the heart of the A-League club's issues, a problem head coach Carl Veart admitted to during the post-match press briefing after the defeat on Friday:

“Again we just didn’t have that quality in the final third, we got them plenty of times and our final ball was just not good enough," said Veart.

“We didn’t take enough opportunities to shoot and it’s a reoccurring theme at the moment that we’re just not scoring goals and to win football matches you have to score goals.”

So far this A-League Men's season, Adelaide players have found the back of the net three times, if one excludes last week's own goal from Melbourne Victory.  One of the three United goalscorers was Kusini Yengi.

The Red's forward was not on the team sheet this past Friday though.  Veart confirmed after the match that Yengi was injured during training on Thursday:

"I haven't had a chance to talk to Kusini, I know he went and had his scans today.

"The first diagnosis is that it doesn't look great.  He will be out for an extended time. How long that is, I am not 100 percent sure.

"We will have to look in the January transfer window to bring in a striker because that is what we are lacking at the moment.

"We need someone that can score goals.  The club will have to have a good look to see if we can actually find a striker."

Adelaide United do not play again until January 1, 2022, after their Round 6 A-League match against Perth Glory was postponed earlier this week. 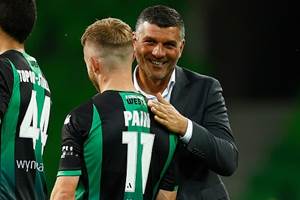 Western United's had confirmed two additional COVID-19 positive cases on Friday prior to their A-League home match against Adelaide United. 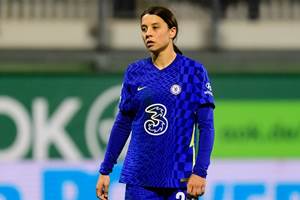 It was a difficult week for Chelsea FC, which included two positive COVID-19 cases and has concluded in their 2021-22 Champions League campaign being over. Elsewhere in the competition four other Matildas did progress to the knock out stage.