Adelaide United held on for a deserved 2-1 victory over Brisbane Roar who made an almighty effort in the final stages of the match, but could only pull one goal back.

The great football on display was overshadowed by biffs and bumps which saw both sides lose a player to red cards.

Izzo was beaten for all money but the post kept the match scoreless as Adam Taggart threatened. Izzo made another point blank save against Taggart when Ben Halloran headed back towards his goal and Taggart volleyed first time.

Lazy defending allowed Brisbane to counter-attack but luckily the base of the post saved Marrone's blushes as Taggart nearly made it six goals in six games.

Elsey wasn't troubled too much by Adam Taggart except when Marrone's howler sent Taggart through one-on-one. Comfortable work in defence from the centre back.

The defender had no chance as Adam Taggart scooped past him to run through on goal. Regan's looping header in the first half caught Izzo unaware as it hit the crossbar, the third time the ball hit the bar in the match.

Regan was given a second yellow card and sent off after tussling with Stefan Mauk and attempting to claw at the Brisbane player's face.

A quiet night for Galloway who was confident on the ball, although as Isaias was covering his spot when he went forward, Brisbane brought one back through his channel.

Isaias did the job tonight and was crucial to Adelaide's counter-attack. The Spanish captain opened up an avenue for Goodwin who assisted Halloran for the opener.

Terrific vision to switch the play, and in turn, create Adelaide's first half chance for Ryan Kitto and a goal moments later in the match: Goodwin looked up, picked his spot and drove his low cross to Halloran who side footed home. 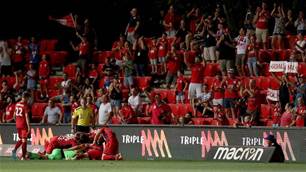