Mat Ryan was the hero in a nail-biting FA Cup shootout whilst James Holland's plucky Austrian side hit their 12th match unbeaten in the Austrian Bundesliga.

In the English Premier League Aaron Mooy got an assist as Huddersfield Town went up 3-1 at West Ham's Olympic Stadium, only to go on to lose 4-3 in a heartbreaking match for the relegation fighting club.

17' GOAL #whufc 1-1 #htafc: Juninho Bacuna looses his man and powers a header past Fabianski after meeting an @AaronMooy corner.

The set piece came from a Tommy Smith shot being blocked on the edge of the area.

Mat Ryan was again the penalty hero for Brighton saving a spot kick in the shootout to help his side advance to the semi-finals of the FA Cup against Millwall. Ryan will prepare to face Manchester City in the next round.

In the English Championship Bailey Wright was an unused sub in Bristol City's 1-1 draw with Ipswich Town for whom Callum Elder was absent. Mile Jedinak was an unused sub for Aston Villa in their 3-1 win over Nottingham Forest. Later in the week Jedinak was also on the bench for Villa's 3-0 win over Middlesborough. James Meredith was an 84th minute sub for Millwall in their 2-0 win over Birmingham City. Massimo Luongo completed 90 minutes in a 2-1 loss to Rotherham United for whom Ryan Williams was an unused sub. Later in the week Luongo played 90 minutes in a 2-2 draw with Hull City for whom Jackson Irvine played a full game. Irvine also played a full match in a 3-2 loss to Norwich City. Adam Federici was an unused sub in both of Stoke City's matches this week in 0-0 draws with Derby County and Reading FC.

In Scotland Mark Milligan played a full match for Hibernian in a 2-0 win over Motherwell. Ben Garuccio played a full match while Oli Bozanic was an unused sub for Hearts in a 1-0 loss to Hamilton Academical. Ryan McGowan played a full game as Dundee FC lost narrowly 1-0 to Celtic at home with Tom Rogic still sidelined with injury. In the Scottish Championship Scott McDonald yet again was on the scoresheet for Partick Thistle in a 1-1 draw with Falkirk.

In the English Youth Leagues Con Ouzinidis was an unused sub in Everton U23's clash against Arsenal U23's. Tyrese Francois played an hour for Fulham U23 in a 0-0 draw with West Brom U23. Later in the week Francois played 120 minutes in his sides Premier League Cup match with Leeds United U23 which they lost 5-4 on penalties.

Riley Warland was absent from Fulham U18's squad that was defeated 3-2 by Reading U23. 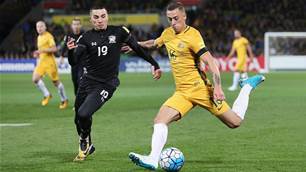