Gareth Bale has described his record-breaking move to Real Madrid as a "dream".

Speaking during his unveiling at the Bernabeu, the former Tottenham forward - who reportedly cost around €100million - also explained he wants to help the club win their long-awaited 10th UEFA Champions League crown.

Real president Florentino Perez introduced Bale to around 25,000 fans in the stadium, before the Wales international said: "I just want to say that it is amazing to be here.

"I hope I can help bring success to the club and that we can win the club's 10th European Cup this season."

The 24-year-old also spoke in Spanish, adding: "It is a dream to be here in Madrid. Thank you for this welcome. Hala Madrid."

Perez described the negotiations as "intense, complicated and prolonged" but said the club were delighted to secure Bale's services.

"Bale is exceptional. He was named best player in Premier League last season," he said.

"He is a young player, but with great qualities, who has now realised one of his greatest dreams, which was to be a Real Madrid player."

Addressing Bale, he continued: "This is your stadium, this is your shirt, these are your supporters. From today on, this is your home and that of your entire family. Welcome to your team, welcome to Real Madrid." 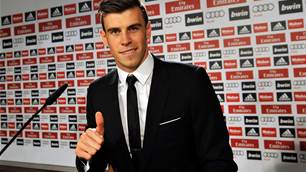