Western United’s push into regional Victoria is supercharging the A-League for fans and players, says one former Melbourne Victory striker.

Now in his mid-30s, James Robinson is Ballarat City’s Director of Football.

It allows him a wide-reaching influence at the region’s flagship club.

And it is an area that has council-backed football facilities and talent to burn, according to English-born Robinson.

What’s more, with Western United playing two games against A-League opposition later this month as part of Ballarat’s “Festival of Football”, he says football's boom in Ballarat will continue apace.

“It's been fantastic with Western United and credit to them and how they have gone about engaging with the community and their strong commitment to the people and the game,” Robinson tells FTBL.

“It's given the game an extra bit of energy because you are getting all stakeholders asking questions and wanting to know a bit more.

“We have the current and future players of the game seeing a tangible pathway to the football club, on and off the pitch.

“This is a game-changer for the region and one that will continue to get stronger as time goes on.”

The future is what Robinson’s club is focusing on, and they have taken a conscientious step into youth development.

First-team player payments are a thing of the past as that money is redirected into developing younger players.

“We played their youth team and City coach Erick Mombaerts liked both players and invited them in to train.

“It was a step up for both players but you will definitely hear more about them in the future,” said Robinson, himself a former professional with Crewe in England.

“We have had 14 male and 5 female players from our Academy make their debuts for the respective first teams this year.

“All young players need opportunity, but they also need to understand that opportunity comes with responsibility.

“Brandon Lauton came through the academy and he made his 1st team debut at 15 years of age at the club.

“He is starting to get some opportunity at Melbourne Victory but he is getting chased by his two younger brothers, Leighton [17] and Jordan [16], who is playing first-team football and have the potential to make the step up.

“Jordan recently turned down Melbourne Victory academy to make sure he maximises his studies and family.

“There is untapped potential for the game in the region and when preparation meets opportunity, it creates a platform for the game that will create a football future that we all want to be a part of,” added Robinson.

The Festival of Football is a sign of intent for the game in the region and the new A-League club in Western Melbourne.

Then, on Friday September 27 also at 3pm, they face the daunting task of Sydney FC, the reigning A-League champions.

Both games will be at the impressive Ballarat Regional Soccer Facility.

It will be the precursor for four A-League games that Western United have committed to play in Ballarat in the upcoming season.

Clearly this is an area that has a strong football presence and pleasingly, the local council is investing in the game for the benefit of the local community.

The City of Ballarat has invested in the local league infrastructure allowing more pitches to be sustainable in winter and also allow clubs to train in the evenings with new lighting.

“We are very fortunate in terms of facilities, as we have one of the best boutique football stadiums outside of the A-League and access to two artificial pitches in the same precinct,” said Robinson.

“Football is growing rapidly and we need to make sure we prepare ourselves to support the demand.

“Grassroots to professional, the passion from both male and female players in the region to play the game, is one that will continue to flourish in a supportive environment.

"Football has its challenges in the Australian landscape, whether your regional or metro. It all depends on what you want to focus on."

Robinson, a former Brisbane Roar youth coach, now has a pro diploma coaching certificate and has enrolled in a Masters Degree in Sports Directorship in Manchester. 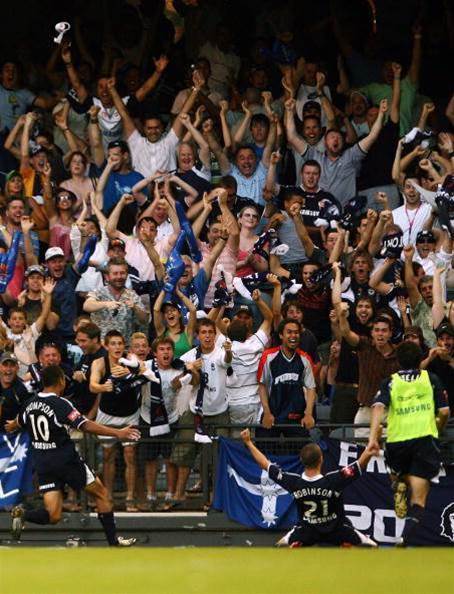 He’s looking to make a long-term commitment to football in country Victoria.

"When people ask the question about the Victory goal, it's nice to share the memories that it brought,” he said.

“I think the goal was a memory that will allow me to tell the young players to continue to dream.

“I had played that scenario in the streets from a young age and even celebrated like it too.

"That's the reason we play.”