PFA President Alex Wilkinson insists Kate Gill and Beau Busch will be too busy to trip each other up when they take on dual leadership of the player's union ahead of a hectic first 12 months.

Former CEO John Didiluca announced his departure last month to be replaced by his deputy Kate Gill and head of player relations Beau Busch as Co-Chief Executives at the organisation.

But the next 12 months are going to be some of the most difficult the union has faced with the current Collective Bargaining Agreement ending on August 30 on top of complications with player contracts with the next A-League season played out in winter.

Their first steps were taken on Wednesday morning with the release of the 2019/20 W-League report indicating a crossroads for the top tier of the women's game. 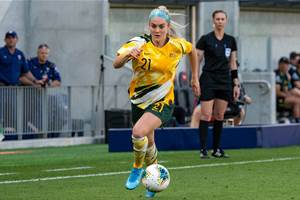 W-League at crossroads amid Euro exits

As Matildas flock to Europe, the PFA says the W-League must decide whether it wants to be a development competition or compete with the world's top leagues.

Wilkinson says Busch and Gill's dual leadership is only positive and that they will be able to avoid tripping up over each other during negotiations.

"They are both very good at what they do and we're both keen on the dual leadership role," Wilkinson said. "They both looked after separate parts of the business so there won't be any stepping on toes.

"They were both really keen to work together on this next period of bargaining we are about to go through. It's obviously a crucial time for players and the next three months is going to be challenging.

"They are keen to tackle that together and we don't see it as anything changing dramatically, just a continuation of what's already happening."

Wilkinson expressed concern for players prior to the announcement of the revised broadcast deal with Fox Sports, which allowed the league to go ahead and allayed short-term fears for some players.

But uncertainty remains with the next three months technically still being mapped out and the future beyond the completion of the 2019/20 A-League season is still up in the air.

"I think we are now back to doing our job on a daily basis some of that anxiousness has lifted, but there is still uncertainty around next year and what's happening there," Wilkinson told FTBL.

Another part of the bargaining backlog to hit Busch and Gill at the PFA will be navigating the rest of the group stage of the Asian Champions League.

Sydney FC and Melbourne Victory have four matches to play while Perth Glory have five. The Asian Football Confederation announced the group stage will be completed in two weeks starting from October 16 in the East Asian conference.

The possibility of Australian cities hosting Asian Champions League 'hubs' in October is rumoured to be on the cards for some participating clubs. However, the risks associated with international travel are likely to involve the PFA in that decision.

Perth Glory previously refused to travel to China for their match against Shanghai Shenhua earlier this year due to the risk of coronavirus.