BAYERN Munich came from behind against Hoffenheim to return to the Bundesliga summit and equal a long-standing league record.

Bayern are now unbeaten in 36 Bundesliga games, matching the mark set by Hamburg between January 1982 and January 1983.

The reigning champions also top the table by a solitary point once again, having been briefly overhauled when Borussia Dortmund thumped Stuttgart 6-1 on Friday.

Dominick Kumbela’s 81st-minute strike proved decisive for Braunschweig, who had won just one of their previous 10 league fixtures.

Leverkusen's misery was compounded when fit-again Lars Bender, who signed a contract extension on Thursday, received a late red card for his second bookable offence.

Borussia Monchengladbach and Wolfsburg complete the top five after each won on the road.

Max Kruse scored both goals as Monchengladbach triumphed 2-0 at Hamburg, the forward opening the scoring in the 22nd minute before finding the net again 18 minutes into the second half.

Wolfsburg left it late to beat Eintracht Frankfurt 2-1 for their third league victory in succession.

With a draw appearing likely, Maximilian Arnold struck in the 82nd minute to tilt the game in Wolfsburg's favour.

Schalke leapfrogged Hertha Berlin into sixth with a 2-0 victory at the Olympiastadion.

Adam Szalai's fifth goal of the season put Schalke ahead after 26 minutes and the Hungary international turned provider to set up Julian Draxler for a second deep into injury time.

In Saturday's other game, Freiburg recorded a 3-0 win at Nurnberg to climb above their fellow strugglers.

Both sides were seeking a first three-point haul of the season and a tight finish looked to be on the cards when Oliver Sorg was sent off for the visitors following Felix Klaus' 57th-minute opener.

Nurnberg failed to capitalise on their numerical advantage, however, and conceded further goals to Vladimir Darida and Admir Mehmedi in the closing stages. 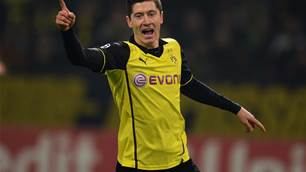 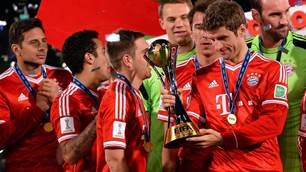 Muller: It will be tough to match 2013 success