When the sole Australian currently operating in the world’s most popular league is a referee - former A-League official Jarred Gillett - you know you’ve got a problem.

Middlesbrough new-boy McGree and Gold Coast-born Queens Park Rangers striker Dykes can, however, restore a slither of Aussie pride if either, or possibly both their respective clubs are promoted from the Championship this season.

The absence of Aussies from the EPL - and most of Europe’s other elite leagues - is a metaphor for the nation’s failed player identification and development system over the past decade.

A sharp decline in numbers followed in the intervening years - heralding the ultimate extinction of the lesser spotted Aussie.

But Dykes - who wears the Navy Blue of Scotland at international level - and Socceroos midfielder McGree are both knocking on the door.

Dykes’ QPR sit fourth after 31 games - six points off an automatic promotion spot, whilst Boro are three points further back in sixth place, bang in the play-off mix.

In his second season at Loftus Road following his $4 million move from Livingston, Dykes, 26, is the London club’s fulcrum.

And he views the hallowed land of the EPL as a realistic target for Mark Warburton’s side.

“We’re just trying to keep pushing forward and see what that brings us,” Dykes told FTBL.

“It’s been an amazing year for me with Scotland in playing at the Euros and now two games away from qualifying for the World Cup, and the aim is also to do something special at club level.

“We’re in a really good position but there are a lot of games left and you can’t get carried away.

“The top six, though, is 100 per cent our aim and something we should be achieving from where we are at the moment.

“An automatic promotion spot is also most definitely in our sights - a lot of things come into play but we have a great squad with great depth and we believe in ourselves as a team.”

McGree, meanwhile, made his debut for Chris Wilder’s men in last weekend’s 4-1 thrashing of Wayne Rooney’s Derby County, looking far from out of place after coming on in the 66th minute at the Riverside.

Riley McGree came off the bench to play the final 20 minutes of Middlesbrough's 4-1 home win over Derby#BeUnique | #Boro pic.twitter.com/MWCUODgPCs

Plucked from MLS expansion club Charlotte without playing a single game for them - via a dazzling loan spell at Birmingham City - McGree, 23, could be a Wilder wildcard as Boro seek to end a four-year spell in the Championship.

The former Sheffield United boss believes McGree, who opted for Boro ahead of Ange Postecoglou’s Celtic, won’t regret the decision.

“We’ve bought a really good player – value for money, great age, great attributes that fit into the way we play, technically good enough, athletically good enough and from a mentality point of view that Aussie winning mentality,” he told the Yorkshire Post.

“Riley’s got to put pressure on the people in front of him. If you’ve got a good group and there’s fierce competition in the right way, there’s no downside.

“If it opens up for Riley, a really good player’s going to get in the team.”

“Each game I think I’m learning a lot and continually improving,” he added. "I’m feeling good in myself and feel I fit in really well when I came down from Scotland.

“My family is happy here and it’s a great club to be at. I’m an honest player and I put my body about for the team, whether that’s attacking or defending.

“Football is a funny game - you  have to learn as you go and I think there’s still a lot to come in my game.”

Ten Matildas played in the FA Women's Super League this past weekend, some picking up important points, others sharing them. 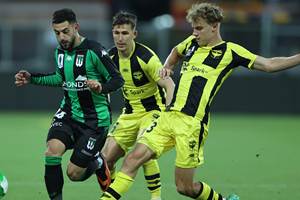 Teenagers Oskar van Hattum and Finn Surman have become the latest New Zealand talent to graduate to the professional ranks at A-League Men side Wellington.

The EPL can be viewed on Optus Sport in Australia.