EXCLUSIVE:She's the US heroine for scoring the winner in the Olympic final, and she did it with a little help from Australia's Con Boutsianis.

Boutsianis, 36, spent a week with Carli Lloyd in July in New York as she prepared for the Olympics in China at the Universal Soccer Academy.

The former NSL great and Socceroo worked on the US attacking midfielder's striking technique at the request of her coach James Galanis.

And bringing "Boutsy" to New York was worth the investment she says.

"After training with Con I became more confident in striking free kicks and I feel that I am more effective when in and around the box," she tells au.fourfourtwo.com.

"The way he communicated the mechanics of striking the ball was definitely world class".

Boutsianis was widely regarded as the finest striker of the ball in the pre-cursor to the A-League, the NSL.

Many of his goals were long range efforts and from set pieces at clubs such as Perth Glory and South Melbourne. He was also capped four times for Australia.

"His knowledge is priceless and I can't thank him enough for all the attacking skills he taught me. Training with him helped me go into the Olympics loaded in confidence."

Lloyd, 26, made her debut in the US national team in 2005 and is generally considered to be the brightest star in the current side. She scored the winner against the Matildas last July in a 3-2 win. 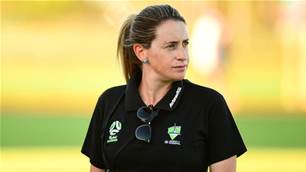