Perth Glory skipper Diego Castro is set to miss the start of the club's three-match Victorian swing, but the Spanish star could be back to terrorise Melbourne Victory and Melbourne City.

Glory coach Richard Garcia said Castro was unlikely to return for Saturday's clash with Western United in Geelong, but the 38-year-old is on track to take on Victory three days later and also Melbourne City on Sunday week if he pulls up well.

Three matches in eight days will test Glory's depth, but Garcia says the club's Asian Champions League campaign in Qatar had given them invaluable experience on how to deal with a fixture squeeze.

"We've had a little bit of practice with the ACL when the games came thick and fast, but it's going to be a difficult challenge," Garcia said.

"We're going to have to use everyone which is a good thing for the squad. It's a big challenge but I think the boys are up for it."

Star Socceroos winger Chris Ikonomidis (knee reconstruction) is still at least a month away from returning, while veteran defender Osama Malik is still nursing a shoulder injury after suffering a dislocation.

Glory's older heads and youth players combined brilliantly against Adelaide to open up a 5-1 lead, giving rookie coach Garcia full confidence he has enough talent up his sleeve for a successful campaign.

The three-pronged strike force of Andy Keogh, Bruno Fornaroli and Nicholas D'Agostino were mesmerising against Adelaide.

D'Agostino notched a brace, Fornaroli scored a goal and set up another by winning a penalty while Keogh had two assists.

One of the big questions Glory faced heading into the season was how prolific goalscorers Fornaroli and Keogh would work together, and the pair's brilliant first-up display is cause for optimism.

"I thought Bruno and Andy were fantastic," Garcia said.

"Andy had two assists and worked tirelessly and was always a threat. And Bruno the same.

"They work for the team, they don't work for themselves. They are building a fantastic partnership. When you have players like them they bring other players with them." 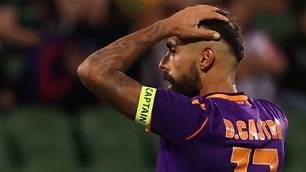