One of the A-League's most pulsating games of the season so far came to an end after 100 minutes of football as Central Coast Mariners somehow saw off Melbourne Victory 3-2 after two late penalties.

It was a classic game of two halves - Mariners looked to have little hope in the opening 45 as Victory dominated and got the goal their play deserved.

It was Kristijan Dobras who grabbed the opener, his shot from the edge of the box taking a wild deflection off a Mariners defender that left Mark Birighitti completely wrongfooted in goal.

Whatever opportunities Mariners had to equalise came through the wonderful crossing ability of Tommy Oar from the left so it was ironic when their first equaliser arrived from the opposite side of the pitch.

Lewis Miller took his time to pick his spot and found the gleefully waiting Jordan Murray to plant his header into the net on the stroke of half time.

It was the men in yellow who came out brighter after the break, throwing everything they could into the Victory box but it was the visitors who found the next goal in the most cruel and comical manner.

Adama Traore took his man on well and steered a deep cross to the back post, it eluded the stretching Birighitti, hit the post before coming back off the unfortunate Kye Rowles.

With only 10 minutes remaining, the home supporters would have been forgiven for thinking a result was out of their reach but all the drama was still to come.

The substitute Matt Simon jumped up with James Donachie to meet a hopeful cross and an outstretched hand clearly interfered with play; VAR conducted its customary check, gave the penalty, which Simon duly smashed into the middle of the net.

This equaliser remarkably came in the 94th minute but the referee allowed another six minutes to be played.

Simon then started a fight with Traore and both got a yellow card as tempers flared and emotions overflowed, the effect VAR usually brings out in footballers.

With an astounding 100 minutes on the clock, Michael McGlinchey ran through in the box and was clumsily pushed to the ground by Leigh Broxham and VAR agreed with Mariners again, much to Victory's anger.

Marco Kurz was sent off for his protestations as the men in blue surrounded the referee.

It was left to the fired-up Simon to absolutely blast his second penalty off the bar and into the net to somehow give his side the three points in Gosford.

This was the perfect advertisement for the weird and wonderful A-League, where there's rarely a dull moment.

The win puts some much-needed distance between Mariners and Newcastle Jets at the bottom of the table and also sees them gratefully win for the first time against Victory in 19 meetings.

As for the Melbourne outfit, they remain in sixth place and will be desperately disappointed not to have gained at least a point from today.

They travel next to Adelaide United, another tough game; Mariners, meanwhile, visit Western United next weekend, looking to climb the standings and put a run of form together after this spectacular win.

Made some solid saves but suffered such misfortune for both Victory goals.

Most often the last man for Mariners, Kruse’s movement gave him lots to contend with, particularly in the first half.

Brought the ball out of defence well on occasions but he too struggled with the Kruse and Kamsoba in attack.

Thought he had scored a well-taken goal for his side which VAR unluckily ruled out and then suffered the ignominy of the ball ricocheting off him for Victory’s second. 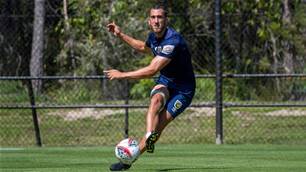