Poulsen, 36, has made over 400 club appearances and scored 64 goals across the Danish, Dutch and French football leagues, including with French Ligue 1 giants Monaco between 2012–2014.

Since 2014, Poulsen has made 232 appearances for Midtjylland, winning two Danish Championships and one Danish Cup and  35 Denmark caps including the 2014 World Cup.

“I am really looking forward to this opportunity to play for Victory,” said Poulsen.“My family and I are very excited about living in Melbourne and learning the culture of the Melburnians.

“I also can’t wait to see if it’s true that Victory has the best fans in the A-League.”

Coach Marco Kurz said he was pleased to welcome the Danish midfielder to the club as his squad for the 2019/20 season nears completion.

“To sign a player of Poulsen’s experience is fantastic for the club," said Kurz. "It was important for us to bring in another leader – someone who can perform under pressure, and set the standard for the other players alongside him..

“Jakob is not only a strong leader but is also very good technically, and poses a significant threat from set-pieces, something seen throughout his career and particularly as captain at Midtjylland. This ability will be another important element for the group as we continue to build towards Round 1.

“The squad is now almost complete, with just one international spot remaining. It’s exciting for us within the club, but it’s also exciting for our members and fans.”

Poulsen will arrive at the club this week and begin training with the rest of the squad pending a medical assessment. 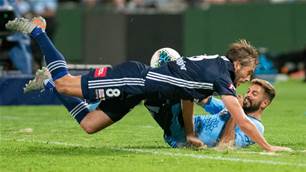