James Smith recently caught up with Johnson at a Jim Beam Racing promo day at Eastern Creek and tried his best not to appear too starstruck.

James Smith recently caught up with Johnson at a Jim Beam Racing promo day at Eastern Creek and tried his best not to appear too starstruck. 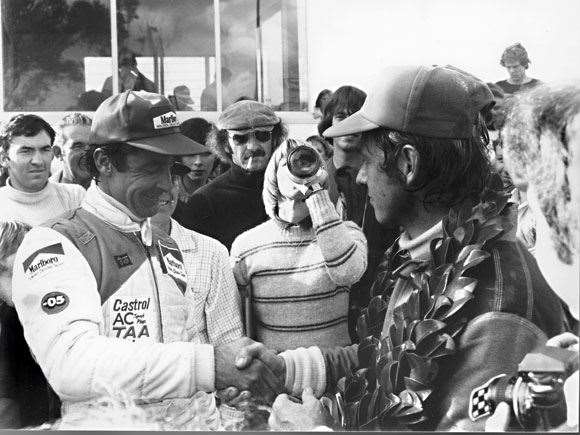 “When you beat Brocky, you knew damn well you’d just beaten one of the best. Image: Chevron Library

Most significantly, though, “Tricky Dicky” was a thrill-seeking flag-waver for battlers Australia-wide. He was their man. In 1980 his disciples donated tens of thousands to get his Tru Blu XD Falcon back on track after he hit a boulder that had rolled onto the Mt Panorama circuit while “DJ” led the Great Race. “The rock” ended his day, but the support he received kick-started the career of one of the true legends of Australian sport. He took just a year to repay the faith, winning the Bathurst 1000 for the first time in ’81.His two other famous Bathurst victories, five Australian Touring Car Championships and spectacular crashes complete one hell of a highlights reel of a career which ended in retirement in 1999. Johnson’s still very much involved with V8 Supercar team Jim Beam Racing (or DJR), which boasts his son Steven and star recruit James Courtney. James Smith recently caught up with Johnson at a Jim Beam Racing promo day at Eastern Creek and tried his best not to appear too starstruck.

Who was responsible for kicking off  the driving life of Dick Johnson?

“My Dad used to get me up at 4.30 every morning for swimming training down at the Valley Baths in Brisbane. We lived at Coorparoo, about a 15km drive away. He had ambitions of me being an Olympic swimmer and I did extremely well at it. But at the end of the day, the only way he could get me to train was if he let me drive the car from home down to the pool. I was eight years of age. I don’t just mean sitting on his lap holding the steering wheel … I was in the driver’s seat, he was sitting next to me, my two sisters in the back. He obviously saw what my real passion was.”

“When I first got involved it was very much an amateur sport. There was no professionalism at all. You certainly couldn’t have sponsors. Back then, the car that I used to race was the one I used to drive to work everyday. “Being forever pulled up by the police or the transport department – who never liked people modifying cars from their original manufacturer’s specifications – made me realise I needed two vehicles, one to tow the car and one to race, but I could never afford it. The only way I could fund it was to be self-employed, which I was, after I did two year’s national service. “I thought, ‘How am I going to find the money?’ hoping I’d find a bird who had a car! This is where I met my wife, Jill … but not in that order, of course. The vehicle she had at that point was a Mini, which was totally unsuitable for towing anything, especially a Holden on a trailer. So I convinced her she had to sell that and buy a bigger, more powerful car, which she did … There was our tow car. Then we were on the road, as they say, and we’re still on the road 30-odd years later.”

Is there any discipline or category of racing you never competed in?

“I’ve never ever driven an open-wheel car, other than a Model A historic car which I drove in a hill climb, which you wouldn’t exactly say is conquering the open-wheel brigade.“It was something I promised my mother I’d never do ... other than go-karts, of course – I took those up when I had a bit of a lull in my career. On occasions you’d end up with a helmet, a pair of gloves and race suit and nothing to sit in. That’s when I was driving other people’s vehicles.”