Patrick Flottmann left Sydney FC for more game time. He got that in Thailand. But he got a whole lot more.

Flottman’s story is a familiar one.

A talented but largely unsighted young Australian in an A-League squad squeezed out of the starting XI because, in Flottmann’s case, Sydney FC’s all-star defence.

And with fewer opportunities in a 10-team league - nine clubs in Australia; one in New Zealand - at 21, what do you do?

Stay on, remain in a comfortable environment and hope you get a chance? Maybe.

Or do you back yourself, go abroad and gain much-needed regular football in a new and challenging football culture?

That was almost six months ago when he left the high-flying Sky Blues for an adventure in one of Asia’s vastly improved football cultures: Thailand.

He’s not the only one seeing the future.

As an example, the Socceroos failed to defeat the Thais in two World Cup 2018 qualifiers.

And there are increasing numbers of technically gifted Thais such as Chanathip ‘Messi Jay’ Songkrasin, in the region’s strongest league, Japan’s J1.

Even in the Asian Champions League, Thailand is starting to make some serious headway (for that, read Buriram United who defeated Jeonbuk Motors earlier this year in the ACL).

Talk about a challenge.

But even in T2, it’s been an eye-opener the number of quality foreigners Flottmann has marked in the heart of the Blue Eagles’ backline. 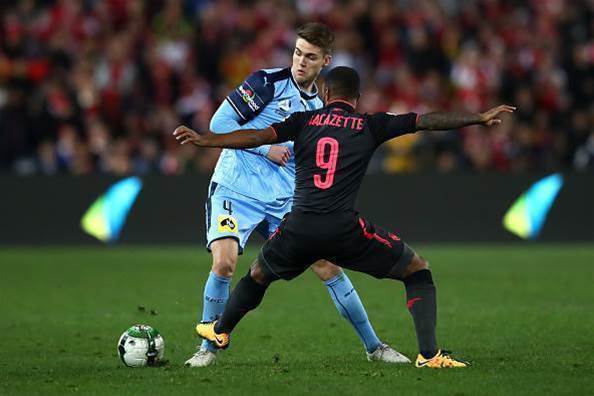 Flottmann against Arsenal's Alex Lacazette in their 2017 friendly

And ask any football agent, they’ll tell you the Thai league is out-muscling Australia on the foreign talent front simply because of the increased financial power of their clubs.

You'll find a lot more Brazilian strikers in Thailand than in Australia these days, and quality ones too.

“Personally, I feel as if I have learned a lot already in just 11 games and I know that I still have much more to learn,” Flottmann told FTBL.

“Playing in the Thai league is much different from back home with the difference in climate and playing style and that has provided me a different way to view and play football.”

And for Flottmann, he can fight each week with promotion and relegation the big motivation.

“And for me, it is a good challenge as I come up against top foreign strikers week in week out," he said.

“I would say Melvin De Leeuw from Lampang and Barros Tardelli from Bangkok Glass are two of the best I’ve faced.