Football Australia remain hopeful of holding home World Cup qualifiers for the Socceroos in 2021 despite being forced to play China at a neutral venue.

Football Australia intends to keep pushing for the Socceroos to play World Cup qualifiers on home soil in October and November.

Australia's strict quarantine laws have forced next week's home tie against China to be moved overseas with FA confirming on Thursday the match will be played in Qatar.

Doha's Khalifa International Stadium will be the venue for the start of Australia's next step on the road to the 2022 World Cup with the match to be played next Friday at 4am (AEST).

FA chief executive James Johnson said it was still the plan to have the Socceroos play matches aganst Oman (October 7) and Saudi Arabia (November 11) in Australia.

"History highlights that playing on home soil provides a distinct advantage for the Socceroos when it comes to qualifying for the FIFA World Cup," Johnson said.

"While we needed to put (in) place plans to play our scheduled home match against China in Doha on September 2 to keep the ambitions of our players, coaches, staff, and nation to qualify for a fifth consecutive FIFA World Cup in motion, we are equally committed to continuing dialogue with governments about bringing the Socceroos ... home this year."

After facing China, Australia's second match in the upcoming international window will be against Vietnam in Hanoi on September 7.

Graham Arnold's team have played just one of their eight qualifiers in Australia but ended the second round of qualifying with a perfect record.

The top two nations from the two six-team groups in the third stage of qualifying automatically gain passage to Qatar 2022 while the third-ranked teams face a series of playoffs to secure their berth.

Australia's squad for the matches against China and Vietnam is expected to be named on Saturday. 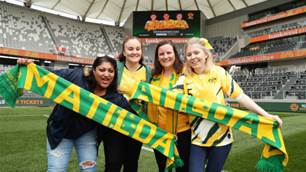