The lack of a starting striker, following injuries to both Baba Diawara and George Blackwood, was a familiar problem that did not seem to faze Marco Kurz and his side as they continued the theme of playing Ben Halloran as a converted striker up top.

VAR’s absence would have been a welcomed by all, as the focus was purely on the football, and was of the highest quality.

Craig Goodwin maintained his record of scoring in each FFA Cup game he’s been part of, ultimately scoring a double and claiming the Mark Viduka Medal for the Man of the Match in the final.

A first half full of hefty and often unnecessary challenges seemed to carry over in to the second half as neither team looked like relenting.

For Steve Corica’s side, the defeat was one they can knowingly accept, with either side struggling to break the deadlock in a match that could have gone any way.

The Adelaide #1 custodian was left stranded by his central defender and forced by the experienced Brosque to give away a penalty, one which he could do nothing about as le Fondre levelled for his side. Saved outstandingly at his near post to deny Ninkovic. Made a mare of his clearances all night long, doing little to ease the pressure on his side.

Physically, the right back was an unforgiving presence, rarely giving the likes of Zullo and Ninkovic room to breathe. The downside was the amount of challenges that went against him and his side.

Culpable completely for Sydney’s immediate equaliser as the defender found himself under pressure from a determined Alex Brosque resulting in an unwelcome backpass that left Izzo dumbfounded and forced into giving away a penalty. Followed up his error with another ‘hospital ball’ a minute later, only to see the Sydney opportunity prevented by his teammates.

The Dane’s experience came to fruition throughout as he frequently kept his backline aware when the pressure was on them.

Stood up strong in moments where his team needed someone to step up. Always an effective presence down the left for his side, which was demonstrated well as he sent in a wicked cross for Halloran to lay off for Goodwin’s second. 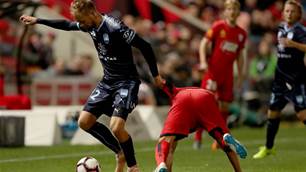