In-form hitman Jamie Maclaren's extended spell on the sidelines is set to present Melbourne City Head Coach Erick Mombaerts with his biggest challenge since he arrived in Bundoora.

Maclaren was in career-best form before suffering a small tear to his hamstring in City’s 2-1 win over Western United on Sunday, finding the back of the net 14 times in just 10 games across the FFA Cup, A-League and international duty with the Socceroos.

However, with the club confirming on Monday morning that the 26-year-old will be forced to spend between 4-5 weeks on the sideline with an injury, the scramble will be on at the City Football Academy to try to find a means of replacing their injured striker’s production.

Ultimately, it will have to be a whole-team effort to replace Maclaren, no other player at City having found the back of the net so far during the 2019/20 A-League season but, assuming that Mombaerts continues to ride the hot hand and keep Craig Noone out wide on the wing, there are a number of options he could turn to in order to fill the void up front.

Deployed on the left-wing in City’s 2-1 win over United on Sunday, young Wales has already deputised for Maclaren in the number nine role during 2019/20 when he served as the tip of the spear in City’s goalless draw with Melbourne Victory in round one.

The 22-year-old was also deployed as a centre forward ten times under former Head Coach Warren Joyce during the 2018/19 A-League season, scoring three goals, and his defensive work rate would seemingly fit the pressing demands that Mombaerts has of his players.

Questions, however, would arise on the youngster’s ability to shoulder the scoring load for City in the coming weeks, with Wales looking out-of-sorts in possession against United.

City’s two Uruguayan imports missed Sunday’s win over United – Luna dropped to the bench and Cabrera not risked after picking up a calf injury – but both could be called upon by Mombaerts to play as a false nine in the absence of Maclaren.

Though primarily deployed out wide with Mexican side C.D. Veracruz during 18/19, Luna did deputise as a forward or second striker on occasion, while Cabrera was touted as having the ability to play centrally when he signed with City at the beginning of the season.

Veterans of many seasons across their South American homelands, Mexico and Spain, the duo would likely be the least likely to crumble under the pressure of replacing Maclaren, but neither has set the world on fire since their arrival in Australia. 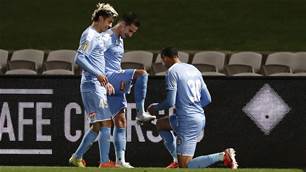 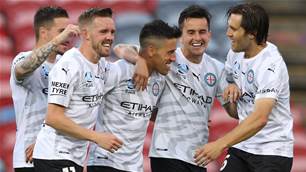 Ernie: It was a comedy of errors...