Former All Whites defender Hay joins Ricki Herbert in having fulfilled both roles after being unveiled as coach by New Zealand Football on Monday.

Schmidt quit the post after just 16 months in charge, partly through frustration at the lack of matches for the national team.

Hay, who played for Leeds United in the English Premier League nearly 20 years ago, said he had devoted the decade since retiring to improving the game in New Zealand.

He felt the responsibility of his new role keenly, particularly with the playing talent available to him.

"The mix of players who have been at big clubs in Europe for a number of years, those operating consistently at MLS (Major League Soccer) and A-League level, combined with some emerging talent, has to excite any football fan looking to the future," he said.

"Ultimately, the next few years is about bringing these players together on a regular basis so that we have a genuine chance of qualifying for the 2022 FIFA World Cup in Qatar." 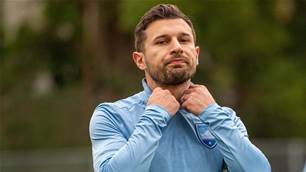 Barbarouses defends his All Whites snub