France beat Uruguay 2-0 in front of 43,319 spectators at Nizhny Novgorod Stadium to book their place in a World Cup semi-final for the first time since they lost the final to Germany in 2006

A first-half header by Raphaël Varane (40’) and an awful blunder by Uruguayan goalkeeper Fernando Muslera from an Antoine Griezmann effort (61’) were enough to take France through.

It was eight matches since Uruguay had tasted defeat and for France one more than that. With both teams in such good form this was always going to be a fascinating battle between the strike force of France that had hit four against Argentina and Uruguay’s mean defence. They had only allowed a single goal in their opening four matches.

With Kylian Mbappé at the fore, France’s potent attack had shown its capability in the 4-2 win over Argentina. Until then they had struggled to break down the defences of Australia, Denmark and Peru but they came into the game full of confidence.

The only change to the side from the Argentina game was Bayern Munich's Corentin Tolisso replacing the suspended Blaise Matuidi in midfield.

An injury to Edinson Cavani sustained in the Round of 16 win over Portugal kept him out of the quarter-final with Cristhian Stuani partnering Luis Suarez in attack.

Although France had the early possession it was Uruguay that first threatened. Luis Suarez fed Rodrigo Bentancur as he moved down the right and his cross went across the penalty area where it was returned only to go across the face again with Stuani waiting for an opportunity.

Hugo Lloris was the first goalkeeper in action when he dived forward to punch clear a Diego Godín following Uruguay’s first corner.

France looked as though they had a golden opportunity to score in the 15th minute when Benjamin Pavard found Giroud with space in the penalty box. He headed the ball to an unmarked Mbappé who had to stretch and could only nod the ball on to the roof of the net from an offside position.

Paul Pogba sent a dangerous ball into the penalty area from the right but Giroud hadn’t quite timed his run as the ball passed just in front of him as he tried to get away from Godin.

Most of France’s threats were coming from the right and it was Pavard that sent the next cross in with Mbappé flicking it on but not quite in the direction of Giroud nor Antoine Griezmann.

While Fernando Muslera hadn’t had a shot to deal with in Uruguay’s goal, Lloris was again in action in the 36th minute when he had to collect Matías Vecino’s left foot effort.

The only goal that Uruguay had conceded in the tournament was following a free kick and they fell behind in the 40th minute to another. They hadn’t been afraid to show the physical side of their game and Rodrigo Bentancur received a yellow card for a scything tackle on Tolisso. Griezmann floated the free kick on to the head of Raphaël Varane who glanced his header into the far corner across Muslera. 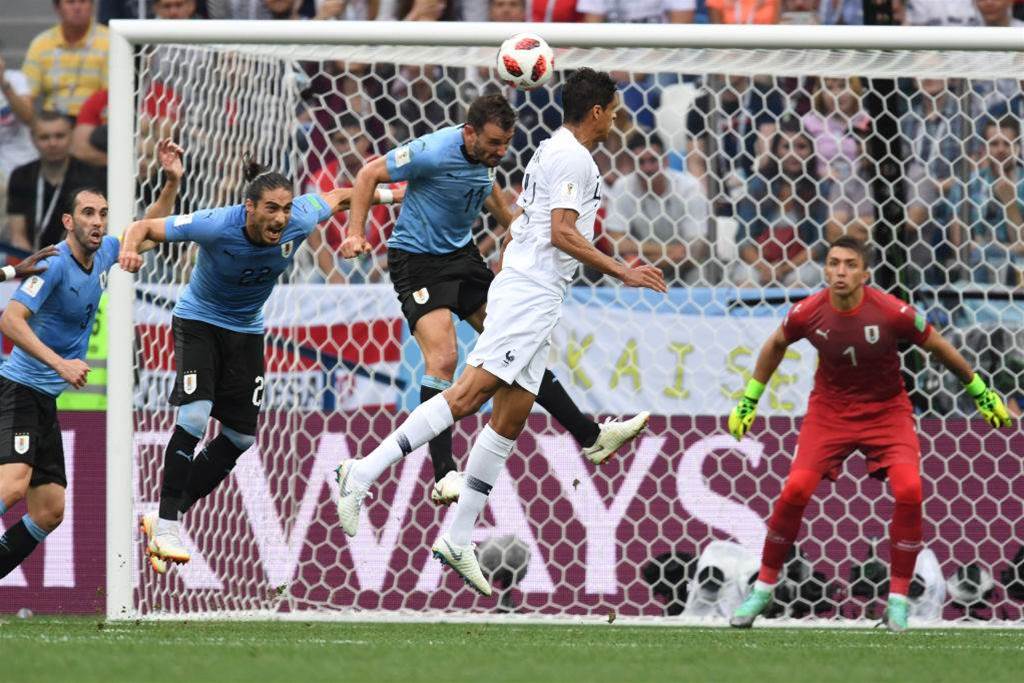 Four minutes later and Uruguay looked as though they’d equalised. Martin Caceres produced a solid header from a free kick from Lucas Torreira that was heading into the bottom corner until Lloris threw himself across to his right to parry the ball away for a stunning save. Godin then should probably have tucked away the rebound but blasted his close range effort wide.

Not unexpectedly, France had bossed possession during the first half and their one effort on target was enough for them to take a 1-0 lead into half-time.

At the start of the second period, France’s goal scorer, Varane, had to stretch to prevent a long ball reaching Suarez as he bore down on goal.

Les Bleus then changed tactics with their next free kick from the right with Mbappé taking over the dead ball situation. His cross was harder and Muslera was forced to punch bravely away from Pogba as he tried to attack the ball.

In the 56th minute Samuel Umtiti was harried out of possession in his own penalty area by three Uruguayan players. He ended up scooping the ball back to Bentancur who had a clear sight at goal but sliced his shot well wide.

Uruguay’s coach, Óscar Tabárez, then decided to change things around with a double substitution. He replaced Stuani with Maxi Gómez up front and Cristian Rodríguez came on for Bentancur in midfield.

Moments later and France doubled their lead. Antoine Griezmann had moved to the left side and tried his luck with a speculative effort. The shot had a slight swerve and Muslera made a complete meal of it seeing the ball come off both of his palms, through his gloves and bounce agonisingly over the goal line.

Uruguay tried to reply with Rodríguez sending a shot from outside the penalty area just wide of Lloris’ right post.

In the 66th minute tempers flared when Mbappé was left on the floor following a challenge. Rodriguez tried to lift him forcefully off the ground clearly not believing that the French forward was injured. This sparked players to run from all directions with Argentinean referee Nestor Pitana taking several minutes to regain control. The outcome was bookings for the two players involved in the initial incident.

In the 72nd minute Tolisso could have sealed the match for France. With Uruguay having to commit more to attack there was uncharacteristic space at the edge of their penalty area but Tolisso’s shot curled over Muslera’s crossbar.

Mbappé then again caused trouble, this time with the ball, when he skipped past a couple of defenders in the penalty area and only a last ditch tackle by the ever reliable Godin stopped him increasing the lead.

With France trying to close out the game, Uruguay became more desperate but despite their urgency they weren’t producing any clear chances.

Pogba beat two players as he surged forward and after he was cut down by José Giménez Griezmann sent the free kick over the bar.

Uruguay can look back at a campaign where their strike force of Suarez and Cavani finally produced in a major tournament. The injury to Cavani was a major blow and clearly left them wanting up front. Although their defence remained solid they were missing a cutting edge with Suarez unable to produce a single effort at goal.

It was an impressive all-round performance by France. They controlled much of the game and were able to produce enough opportunities to earn themselves a win while keeping things tight at the back.