Perth Glory goalkeeper Liam Reddy will be 42 years old by the time his new deal with the A-League club expires after signing a two-year contract extension.

Journeyman goalkeeper Liam Reddy is set to play on into his forties after signing a two-year contract extension with Perth Glory.

Reddy had played for six other A-League clubs before landing at Glory in 2016.

The 39-year-old has chalked up 130 A-League appearances for Perth since then, including 29 in the club's 2018/19 Premiership-winning campaign.

All up he has tallied 326 A-League appearances - the fourth most in the league - after appearances for Sydney FC, Central Coast, Wellington Phoenix, Brisbane Roar, Newcastle Jets and Western Sydney Wanderers.

His 87 clean sheets is an A-League record, two better than Danny Vukovic.

"Liam is an experienced goalkeeper who has done very well during his time with Glory," Glory coach Richard Garcia said.

"He still has a lot of playing left in him and we look forward to him continuing to be an important member of the squad."

The club is in discussions with out-of-contract captain Diego Castro about extending his stay in Perth.

Glory face a fight to retain star attacker Chris Ikonomidis, who is set to field a range of overseas and local offers.

Reddy lost his starting spot to Tando Velaphi earlier this season, but he worked his way back into the senior team and produced a series of stunning performances to restamp his authority. 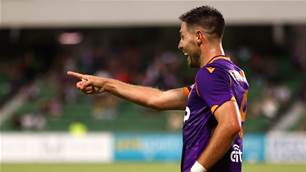