The Futsalroos' hopes of qualifying for the knockout phase at the FIFA Futsal World Cup were left hanging by a thread after they were beaten 3-1 by Ukraine at the Coliseo Bicentenario in Bucaramanga, Colombia.

While not quite a mortal blow, the mathematical equation looks tough for the Australians to overcome as they await the results from other group matches to determine the best third place qualifiers.

There was a sense of destiny being ripped away from the gallant group of players who were incensed by the officials decision not to award what appeared to be a penalty for handball in the dying stages, a decision which, had it gone their way, would have given the Futsalroos the chance to gain the point they required for progression from the spot.

As it was the ball was swiftly thrown up court by goalkeeper Dmytro Lytvynenko to allow Denys Ovsiannikov to control and clip into an unguarded net and seal the result for Ukraine who finished runners-up to Brazil in the pool. 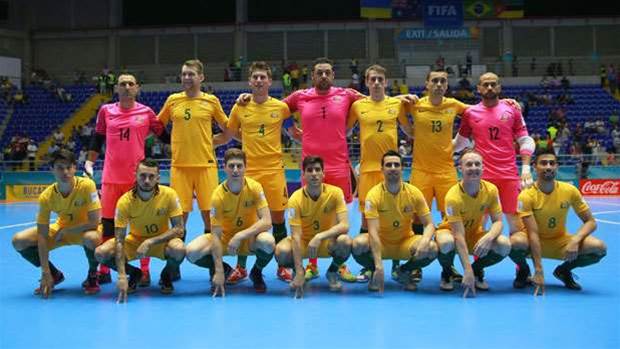 Playing against the No. 8 ranked team in the World, it was hard to discern which were the non-professionals and which were the full-time players such was the level of performance that the Futsalroos put in, a showing which saw them hit eleven shots on target and test the mettle of Ukraine to the full.

Ukraine hit the front in the 14th minute when a shot from distance from Sergiy Zhurba squeezed under the body of Australian goalkeeper Angelo Konstantinou who was possibly unsighted as the ball came through a raft of bodies.

It was the only goal of a half in which the Futsalroos gave as good as they got with Greg Giovenali, Dean Lockhart and Chris Zeballos testing goalkeeper Lytvynenko, in the Ukraine starting line-up due to the suspension of regular custodian Ievgen Ivanyak.

The second half saw Australia playing much the better Futsal but they were hit by a sucker-punch on the counter attack with five minutes to play as Dmytro Bondar broke down the flank and finished low, across Konstantinou, and into the far corner for a well-executed finish.

Forced into playing fifth man the Futsalroos patiently awaited their opening and carved a way back into the match with time running out as Seeto and Jarrod Basger combined for Zeballos to tap home from inside the area and give the Australians hope.

That was crushed as the seconds ran away by the cruellest of endings.