Notts County manager Harry Kewell is setting his targets high and wants his new club to be pushing for promotion this season.

Notts are currently rock bottom of League Two without a win so far this campaign after six fixtures.

But Kewell, who joined from league rivals Crawley Town, is undaunted and is after a spot in League One in 2019.

"I'm excited by this challenge," he told reporters on Monday. "I'm here to work, and I'm here to get the team back to where it should be. We want promotion.

"I know it'll be hard. But I’ve looked as the squad and we’ve got some very talented players here. But they’re willling to learn. I'm excited about the attacking options.

"I need a team that work for each other and keep in position and defend as a compact unit. It's my way or the highway because I hope to bring more people in and create competition for places because everyone works harder.

"The team, at the moment, are just pointing the finger at each other and not taking responsibility. That's something I'm planning to change."

Kewell said he feels proud to be coaching the oldest club in world football and is out to prove his critics wrong.

"It's one of the biggest moments in my career," the Australian admitted.

"I love coaching and to be recognised for what I've done makes me incredibly proud and I want to prove anyone else still doubting me wrong. I can't wait to get in the dugout. I wasn't far away at the weekend.

"It's an important game tomorrow night and the players have a clean slate for tomorrow. My ideas are simple and they know what I expect from them."

New #Notts manager Harry Kewell talking to @OwenShipton: "A lot of people have said I'm aggressive - but I'm a passionate person. I want to win." More from his first Meadow Lane media conference on Ey Up Notts 5.30pm. pic.twitter.com/Bx4XlqkT20

Kewell's first senior managerial role was with Crawley Town last season, where he led them to finishing 14th with a minimal budget.

The 39-year-old is ambitious and believes he is well-placed to achieve his goals at the 156-year-old English outfit.

"When I started coaching, I realised I enjoy it more than playing," the former Socceroo said.

"I feel like the hard work I did at Crawley has paid off and people see what I'm capable of doing and I'm proud that Notts see that and I'm excited for the future.

"The facilties here are excellent, the people are fantastic." 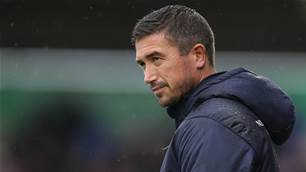