That’s the verdict of the 18-year-old’s mentor and former coach Tony Basha, who was at the Stadio Olimpico in person nine days ago as Sydney-born sensation Volpato came off the bench to score his maiden goal for Jose Mourinho’s side in just his second Serie A appearance.

Eligible for both Australia and Italy, Volpato dreams of representing the country of his birth at a World Cup.

However, according to both Basha and close family members, Volpato’s over-arching imperative is to make further first-team strides with the Giallorossi before tossing his hat into the international ring.

Socceroos coach Graham Arnold stated this week it would be premature to seek to cap Volpato for next month’s high-pressure World Cup qualifiers against Japan and Saudi Arabia.

And Basha - who nurtured Volpato at his Australasian Soccer Academy for four years - concurs.

“Look, Cristian is a proud Aussie - a kid who loves his roots and loves Australia,” Basha told FTBL. “There’s been stuff going round in the media about him not wanting to play for Australia because his talent wasn’t recognised there, and he was treated badly.

“But that’s not the case. The reality is that everybody around him, his management and everybody, believes it’s probably better for him right now to concentrate on trying to establish himself with Roma’s first team.

“Then later, of course we all want to see him play for Australia. You always want to see our best players pulling on the jersey.”

Basha previously worked with Socceroos striker Mitchell Duke, persuading Central Coast Mariners to take a gamble on him back in 2010.

And it was Basha who in 2019 contacted then Roma U-17 coach Fabrizio Piccareta to arrange a trial for the youngster deemed surplus to requirements at both the Western Sydney Wanderers and Sydney FC academies.

Basha believes timing will be key in the youngster’s on-going evolution.

“I think if you threw him into a huge World Cup qualifier against Japan, with the expectation surrounding that, there would be a danger of crushing the kid,” he said.

“I know both Mourinho and (his agent Francesco) Totti have told him to follow his heart (regarding national team football).

"So, if he continues to get minutes in Serie A and Australia hopefully qualify for the World Cup, we might see him in Qatar.

“I know we’re desperate for saviours right now - but throwing him (so soon) probably wouldn’t be a smart thing to do. I wouldn’t do it yet if I was coaching the Socceroos because I don’t believe he’s quite ready yet. It would be a big risk.”

Basha maintains a close bond with Volpato, staying with him and mother Claudia on his jaunt to the Eternal City, where he also touched base with Roma legend Totti, whose CT10 talent agency represents a player who first announced himself with a flurry of goals and assists in the Primavera U-20s competition.

“Cristian is the king of Rome at the moment, they love him,” added Basha with a flourish. “I even got a free Covid PCR test at the airport when the guy saw I had an AS Roma backpack.

“He asked if I was a supporter but when I told him it was given to me by Cristian and that I coached him previously he refused to charge me. The guy wanted to kiss me.

“Riding around in taxis in Rome you quickly find out he’s the talk of the town.

“Long before his first team appearances (against Inter Milan and Hellas Verona) Cristian's been killing it in the Primavera, and lots of fans follow that competition.

“It's those people who’ve been calling for Jose Mourinho to pick him.

“I knew there was something special about him the day I first set eyes on him as a 13-year-old.

“I’m living a bit of dream also because even I didn’t think he’d be making first team appearances for Roma at such a young age. I know for a fact that Mourinho loves the kid.”

“That’s possible,” added Basha. “Especially if he keeps making in-roads in Serie A. But I don’t think that’s going to be a big issue.”

FA CEO James Johnson says a review into the Matildas' Asian Cup campaign won't be a 'witch-hunt' against any individuals, including coach Tony Gustavsson. 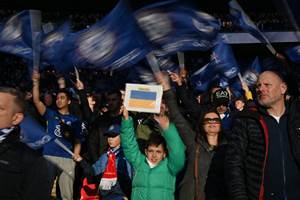 Chelsea's Thomas Tuchel, whose club is Russian owned, and Southampton's Ralph Hassenhuttl, have spoken of the impact of 'the horrible' events in Ukraine.