BAYERN Munich general manager Uli Hoeness will only consider selling Franck Ribery if his club receive a "crazy" bid for the France midfielder.

Hoeness this week informed Real Madrid the Bavarians were not willing to sell the 26-year-old, but speculation is rife he may soon be hearing from Manchester United manager Sir Alex Ferguson - if Cristiano Ronaldo's move to Madrid goes through.

The Barclays Premier League champions yesterday accepted a world record $160 million bid for the Portugal winger from the Spanish giants, meaning they could offer the kind of money that would tempt Hoeness into parting company with Ribery.

Ribery is reportedly one of the players on United's list of targets to fill Ronaldo's boots, and Hoeness has refused to rule out the possibility of letting the former Marseille man leave.

"We would only talk on very strict conditions," he told Munich's Tz newspaper.

"And that would be if they were prepared to do crazy things."

Hoeness recently claimed that not even one of Ribery's legs could be bought for 50 million euros, but the consensus in Germany is that a bid in the region of 75 million euros could prove to be tempting enough.

Having already spent close to that amount on new players this summer, the Bundesliga outfit may welcome the opportunity to recoup their expenditure in one deal - particularly since Ribery has made it clear he fancies a move abroad. 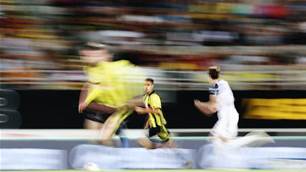