The 23-year-old midfielder - who starred during Spain's success at the recent UEFA Under-21 European Championships - had long been linked with a move to the Santiago Bernabeu and his departure was confirmed at a Sociedad press conference on Friday.

Sociedad confirmed that Real activated the player's release clause, while Real revealed the player has signed a six-year deal after they paid €32.19 million for his services.

Illarramendi, sitting alongside Sociedad president Jokin Aperribay and director of football Lorenzo Juarros, explained his reasoning behind accepting the offer.

"I got the interest on vacation, there were contacts, and we have considered and concluded that it is an irresistible offer," he said.

"The decision was not easy, I had a hard time deciding, Real Sociedad has given me everything and I am what I am because of Real."

Illarramendi made 32 appearances for Sociedad in La Liga last season as he helped the club qualify for the UEFA Champions League and follows Spain under-21 team-mate Isco to the Santiago Bernabeu, after the playmaker joined from Malaga earlier in the month. 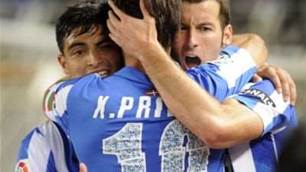