And this has to be good news for Australia’s national teams.

On Saturday, he was a 60th-minute substitute in the Spanish Segunda Division B Group 3, one of the four mini-leagues in the country’s third tier.

As one of the youngest for his La Liga club Levante’s second side, Danzo was a substitute on the hour mark in his club’s 1-0 win.

The opposition Hercules had two or three players with over 100 La Liga appearances, which underlines the quality in the third tier of Spanish football.

Pleasing also, Danzo has had a chance to train with the club’s La Liga first-team squad.

Danzo should be at least on the radar of the Olyroos as they prepare for their crucial Tokyo Olympics qualifiers set for this January.

And with Graham Arnold in charge of both the U23s and Socceroos, Danzo should also be on the Socceroos’ radar if he continues to impress in a country that has produced so many world-class midfielders.

The family arrived six years ago where Danzo played for a small club in Barcelona Gava, before his move to Levante. Danzo has signed a further three-year contract taking him to 2022 at Levante.

The teen is said to be on the radar of the Spanish and Italian FAs but understands his preference is for Australia.

“The level of the Spanish third tier is quite high," Danzo’s father John told FTBL recently.

“Look at players who come to the A-League, like Isaias, who was from their third tier. You've got to battle every week.”

Danzo’s side is 11th in the 20-team Segunda B Group 3 after three games. 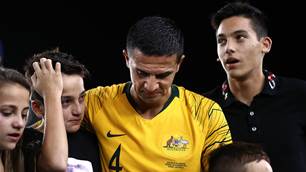