The composite racquet’s arrival ushered in a new era of power and fitness. Its driver was Czech cyborg Ivan Lendl. 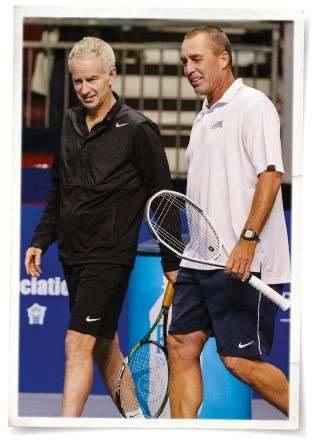 The composite racquet’s arrival ushered in a new era of  power and fitness. Its driver was Czech cyborg Ivan Lendl.

n the 1970s, the “power baseline” game first came to prominence, mainly via Jimmy Connors, as a counter to the kingpins of the serve-and-volley game. Connors was an unusual sight, whomping away in his dramatic “shootout” style, complete with double-handed backhand.

By the end of that decade, the more aggressive baseliner was a lot more common, but before 1975, three of the Opens (Australian, Wimbledon and the US) were still played on fast grass, and the chip-and-chargers, the serve-and-vollyers, still got a look in. John McEnroe came to dominate, and the tradition of exciting exponents like Budge, Laver, Gonzales, Newcombe and Rosewall, King, Navratilova and Goolagong-Cawley, was still alive.

Then the wooden racquet went the way of the dodo, giving way to a composite model.

This ushered in a new era of power and fitness, embodied in one man: the frighteningly efficient Czech, Ivan Lendl.

Whereas Connors’ rifle groundstrokes were flat, passing low over the net, this new breed, with his new weapon, could impart powerful topspin, thus changing the tactics – the very angles – of the game, and turn a defensive style into an attacking one. It was a revolution.

The physics and the physiology of the top-level player began to alter. Bigger men who relied on power were about to take over.

The expressionless Lendl was subject to the same criticism all eastern-European sportspeople get – almost to the point of racial stereotyping. He was robotic, drearily consistent, patient to the point of tedium. But be was also brutal – as heavy-handed as Wladimir Klitschko. Lendl let the ball do the talking – and could he make it talk!

He played a game no one had seen before. Far from being a well-coached cyborg, Lendl was a great tennis thinker. He was the first to construct an entire strategy around the new technology. The composite racquet was capable of doing things wielders of the old wooden variety couldn’t conceive. Not everyone liked the

change. It seemed to mark the death of the pure, talented player of tennis. To see Lendl camping on the baseline, wanging away, aspiring to win every point from there, was to watch the game turn into something else entirely.