Aussie goalkeeper Dominic Kurasik isn't giving up on his European dream and has dropped down to English football's eighth division to gain senior level experience.

Kurasik left Championship club Brentford in the off-season and signed for League Two side Colchester United.

Since September 21 the keeper has been on a short loan at Maldon & Tiptree FC, which play in the Isthmian League One Division North.

Kurasik has been in the UK for the past six years, after leaving South Melbourne as a 14-year-old and signing for Stoke City. He spent nearly five years with the Potters before heading to Brentford last year.

Since joining the Jammers as the replacement for injured keeper Andy Walker, Kurasik has helped Maldon & Tiptree FC go on an undefeated run and climb the table.

The shot-stopper said he is enjoying his spell at the Essex outfit and is looking to possibly extend his loan until January.

"It’s been quite good, it’s first-team football and still a decent standard," the 20-year-old told FourFourTwo.

"Colchester own the club I'm on loan to, so they have a good relationship, decent facilities and the coaches are also from Colchester

"The games have been every Saturday and Tuesday so I’m getting a lot of games. Obviously it’s more physical and even though it’s a lower league, I feel like they take it more serious or go into games more focused."

The whole ground stood to applause the save! @KurasikDominic has got the Jammers out of jail there, Abbey have started the better #MALvsWAL https://t.co/H3JbKrUsWo

Kurasik, who turns 21 next month, has no regrets about dropping down to the eighth tier.
"There's nothing wrong with dropping down and working your way back up," he said.
"Players have this mindset that they want to just stay in the Premier League or Championship because obviously it's a higher level. But in order to develop I felt it was right. After Jamie Vardy there are now a lot more scouts in non-league looking for players."
Kurasik had previously worked his way up through Stoke's Under-18, Under-21 and Under-23 teams as a teenager before appearing for Brentford's B side.
He admits the decision to leave Brentford was a difficult one, but he is adamant his ready for senior football.
Kurasik's target is to break into selection calculations for the U's this season.
"It’s not easy leaving any club but you have to do what’s best for you and I felt that it was the right call," he said.
"Obviously I want to keep playing games and get noticed by the first-team staff and hopefully earn a place in the first-team squad."
Photo credit: Stoke City FC 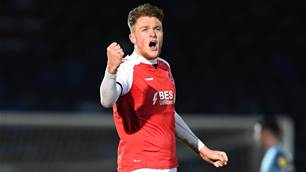