Atletico Madrid has continued their strong start to the season with a 5-0 thumping of Rayo Vallecano in Spain's La Liga.

Raul Garcia opened the scoring in the 17th minute as he rose unchallenged to head Gabri's cross home.

It was 2-0 only four minutes later when Diego Costa just managed to finish past Vallecano goalkeeper Cobeno after Arda Turan's cut-back.

The provider became a goal-scorer on 35 minutes when Costa fed Turan, who took the ball around the 'keeper and found the empty net.

Gabri sprung the Vallecano offside trap to head home eight minutes into the second half before Garcia completed his brace in the 90th minute with a tap-in.

The victory lifted Atletico to their second straight win of the season while Vallecano will be disappointed after a 3-0 win against Elche on the opening day.

The Brazilian right-back cut in from the flank and unleashed a low curling strike that beat goalkeeper Wilfredo Caballero in the shadows of half-time.

It was a narrow victory despite the Catalans enjoying 74 per cent possession and 11 shots on target.

Celta de Vigo secured their first win of the season as they overcame Real Betis 2-1.

All goals were in the second-half with Charles and Nolito establishing a two-goal lead for Celta before Ruben Castro scored a consolation for Betis on 90 minutes.

And Levante hit back from the seven-goal loss to Barcelona on the opening weekend of the season with a 0-0 home result against Sevilla. 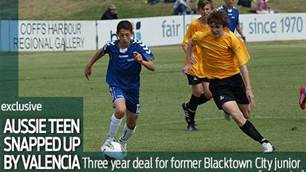 Aussie teen snapped up by Valencia