Toure is a two year veteran of the A-League Mens.  The 21-year old first made his A-League debut in October 2019, starting in Adelaide's match against Sydney FC.  The 21 year old has made 36 senior appearances in all competitions, fifteen as a starter, and scored seven goals.

He won the FFA Cup his first senior year with Adelaide in 2019.  Toure had previously played with the club's academy, featuring for United in the A-League Youth in 2018-19.  He has also featured six times with the Olyroos in the 2020 AFC U-23 Asian Cup.

Speaking about joining the Bulls, Toure said: “I’m very excited to be joining Macarthur FC, the newest club in the competition.

“I’ve spoken to Ante about the style of football and the experience within the squad and I believe this can help take my football to the next level.

“Witnessing the bells last year at Campbelltown created such an atmosphere. Joining the club, my motivation is to score and hear them ring loud and proud.

“I’m looking forward to joining my new teammates and getting straight into pre-season with focus on the competition starting next month."

His new head coach, Ante Milicic said of the new signing: “Al Hassan is a talented player who will help strengthen our squad.

“I believe he can maximise his potential with consistent performances on the training pitch and match days, and I look forward to watching him grow.

“I’m sure Al Hassan will settle in well with the playing group and get to know what the club is all about."

The Bulls also recently appointed Adam Federici as their captain for the upcoming 2021-22 season. 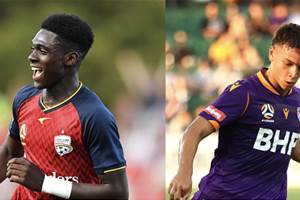 Macarthur FC open their season against Wellington Phoenix on Sunday, November 21, 2021.  Their full schedule can be found using this link.