Julio Baptista is to leave Malaga after the Spanish club agreed to terminate his contract.

The Brazilian striker joined Malaga from Roma in January 2011 and enjoyed success in the early stages of his career at La Rosaleda, but his second season with the club was marred by injury.

The 31-year-old struggled to make an impact after returning to action in the second half of last term and has been strongly linked with a return to his homeland.

Cruzeiro are expected to sign the former Arsenal and Real Madrid forward, who won the Spanish title during his time at the Bernabeu.

"Julio Cesar Baptista and Malaga reached an amicable agreement on Friday 19th July to terminate the striker's contract," a statement on the club's official website read.

"The club and the player came to an understanding following his last match against German side, Kaller SC.

"Malaga would like to wish the Brazilian the best of luck for the future and his new career with Brazil's Cruzeiro." 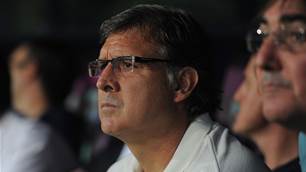